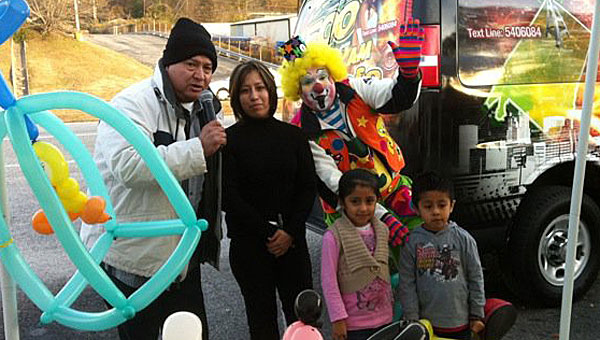 As families slowly work to remove strands of lights from their houses, de-trim their Christmas trees and haul torn wrapping paper to the garbage can, a pair of Pelham businesses are working to bring a brighter holiday to the county’s Latino children.

On Jan. 6, 2011, many Latin American countries will celebrate Dia De Los Reyes, or Three Kings Day, which commemorates the three magi who brought gifts to baby Jesus in Bethlehem.

“It is the 12th day after Christmas, and it celebrates the three kings who followed the Bethlehem star and brought gold, frankincense and myrrh to baby Jesus,” said Theresa De Leon, a spokeswoman for Pelham-based Rivera Communications. “Families will usually place the three kings in their nativity scenes on that day.”

In Mexico and many Latin American countries, children usually receive presents on Dia De Los Reyes instead of, or in addition to, Christmas.

To ensure children in need receive presents on Jan. 6, Rivera Communications, which operates the La Jefa radio stations in Alabaster, Bessemer and Lexington, and the Pelham-based Mi Pueblo Supermarket are collecting unwrapped toys to donate to local families.

To kick off the gift collection, Joel and Isabel Rivera, who own Rivera Communications and Mi Pueblo supermarkets in Pelham, Clanton and Homewood, held a 48-hour toy drive from midnight on Dec. 17 to midnight on Dec. 19.

During the toy drive, La Jefa on-air personalities Jose Antonio and Koke camped in front of the Pelham Mi Pueblo while donors dropped off their gifts.

“We got more than 600 toys that Friday, Saturday and Sunday. It was either 629 or 639, I can’t remember for sure,” said De Leon. “We are still finalizing how we are going to distribute the toys right now. We are still getting names and sorting everything into different age groups.”

The businesses are still accepting toy donations, and parents can register their children to receive the gifts until Dec. 31.

Once the Riveras finalize their toy distribution plans, they will announce the distribution locations and dates on the air on La Jefa, De Leon said.

“We are still in the planning phase for how we are going to distribute everything, but everything has been great so far,” De Leon said. “During the toy drive, we actually had people who went to Mi Pueblo to shop, and they saw us collecting toys.

“A lot of them got done shopping, went over to Walmart to get clothes and toys and brought them back to Mi Pueblo to donate,” she added. “That’s dedication. Everyone has been great.”

Anyone interested in donating an item to the toy drive can do so at the Rivera Communications office at 100 Yeager Parkway in Pelham, or at the Mi Pueblo supermarket at 3010 Pelham Parkway.

For more information about donating a toy, or to register your child to receive toys, stop by Rivera Communications, Mi Pueblo or visit www.aquimandalajefa.com.

The Alabaster Police Department is expecting a heavier-than-normal New Year's holiday this year, as the event falls on a weekend.... read more