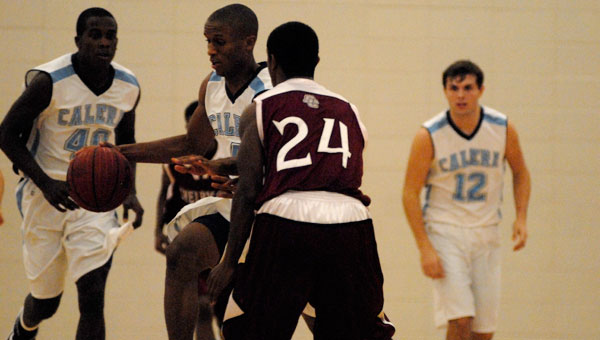 Burdette doesn’t get concerned when opponents make a run.

The veteran coach doesn’t need to when he has players like junior point guard Deondre Haynes on the floor. Haynes kept rival Shelby County at bay for the second time this season in the host Eagles’ 83-79 win over the Wildcats in the Champion Sports Medicine Shootout championship game Dec. 29.

Haynes finished with 22 points, including two baskets and two assists to turn a slim two-point lead into a 12-point advantage in crunch time in the fourth quarter.

“It’s just so hard to guard him when he has the ball,” Burdette said, “especially when he’s on the move.”

Haynes was named the tournament’s most valuable player. Blayne Sumrall added 16 points in the victory. Ronnie Clark, who joined Haynes on the all-tournament team, chipped in 15 points. Titus Adams recorded nine points for the Eagles, who improved to 13-3.

Tyler Madison added 18 points and a team-high eight rebounds. Lollar and Madison were each named to the all-tournament team.

Shelby County had the upper hand early, as the Wildcats jumped out to a 7-2 run to start the game. Haynes brought fans to their feet with two thunderous dunks late in the first quarter to help the Eagles rally to tie the game at 18-18 at the end of the quarter.

Calera pushed its lead to as many as seven points in the second quarter before Lollar nailed a 3-pointer with 10 seconds left in the first half to cut the Eagles’ lead to 35-33 heading into the break. Lollar’s 3-pointer helped Shelby County end the second quarter with a 7-2 run.

Clark’s jumper with 3:48 remaining in the third quarter gave Calera its first double-digit lead at 48-38. Lollar hit two free throws at the end of the third quarter to cut the lead to 62-54 heading into the final quarter.

Back-to-back buckets by Williams following a layup by Madison helped the Wildcats cut the lead to 62-60 after Shelby County opened the fourth quarter with a 6-0 run. Haynes beat a defender and drove down the lane for a one-handed jam to kickstart a 10-0 run by the Eagles, which kept the Wildcats from gaining momentum.

Calera crashed the boards and held a sizable advantage in offensive rebounds, which limited Shelby County to one shot on most possessions.

“The kids played hard and never gave up,” Dickinson said. “We still have to play perfect to beat the good teams.”