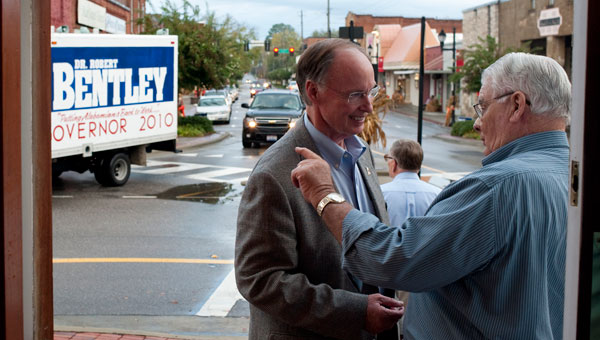 Dr. Robert Bentley campaigned in Columbiana during his run to the governor's mansion. (File photo)

We continue our look back through the biggest storylines and biggest names of 2010.

Brookwood Medical Center moved one step closer to building a freestanding emergency room at the intersection of U.S. 280 and Alabama 119 June 30. The announcement came after administrative law judge James Wilson recommended the hospital move forward with building the emergency room, which would be the first of its kind in Alabama.

VINCENT SAYS YES TO THE QUARRY

Shoal Creek Golf and Country Club in North Shelby County will be the home of the Regions Tradition, one of the five major championship tournaments on the Professional Golf Association Tour’s Champions Tour, for the next three years beginning in 2011. The tournament was announced Aug. 23 at a press conference at the Town Hall at Shoal Creek.

HEROIN USE ON THE RISE

After years of having no heroin arrests or heroin-related deaths in Shelby County, 2010 showed a rising number of both. The increase is likely due to heroin’s easy access as more of it comes in from Mexico, George said.

Alabaster officials completed years of planning and several months of work Sept. 19 when they opened the city’s new senior center off Seventh Street Southwest. The new center replaced the much smaller facility the seniors formerly used, giving the city the chance to offer more programs and greater offerings to its seniors.

Brynleigh Welch, 9, died in an accident Oct. 1 in which her all-terrain vehicle collided with a car. Christian Carter, Welch’s 13-year-old brother, was also riding on the same ATV and was transported to Children’s Hospital.

The University of Montevallo embraced Dr. John W. Stewart III as the 15th president of the university at his inauguration ceremony Oct. 14 in Palmer Auditorium.

The Shelby County Board of Education passed resolutions Oct. 21 to request the Shelby County Commission call a special election for county residents to renew 30 mills in education taxes. The commission granted that request, and the election will be held Feb. 8, 2011.

Alabaster restaurants and hotels will begin declaring themselves either smoking or non-smoking establishments in March 2011, after the Alabaster City Council approved a citywide smoking ordinance during its Oct. 21 meeting.

University of Montevallo campus police chief, Shelley Tyree, was arrested Oct. 26 on domestic violence charges in the third degree, according to university officials. She was placed on administrative leave from the university.

Montevallo police discovered the dead body of Allen Matthew Barber, a University of Montevallo student from Daphne, Oct. 27 in Orr Park. Barber, who was pronounced dead on the scene, died from a gunshot wound. It was ruled a suicide.

Randy O’Neal Davidson, 30, pleaded guilty to the capital murder of 62-year-old Diana Donahoo Rice, whose body was found in St. Clair County woods in April 2009. Both Rice and Davidson were residents of Sterrett. In accordance with the plea agreement, prosecutors recommended he be sentenced to life without parole.

A jury made up of eight men and four women recommended on Nov. 22 Ryan Gerald Russell be sentenced to death for murdering his 11-year-old cousin, Katherine Helen Gillespie, in June 2008. Gillespie’s body was found June 16, 2008 stuffed head first into a trashcan stored in the backseat of Russell’s SUV in the garage of his rental house in Inverness. An autopsy showed she died of a .40-caliber contact gunshot wound to the head. Russell was convicted Nov. 19. Shelby County Circuit Judge Michael Joiner followed the jury’s recommendation and sentenced Russell to death Dec. 16.

The son of an Alabaster City Council member remained in the hospital Nov. 30 after he was involved in a single-vehicle accident Nov. 25 on Morgan Road in Bessemer. The wreck happened at about 2:20 p.m. Thanksgiving Day when a 2008 Dodge Ram pickup truck driven by Kyle Hicks, the son of Alabaster Councilman Bob Hicks, lost control and struck two trees. The wreck happened between Yancy Drive and Aviation Road.

On Dec. 6, the Alabaster Police Department received a call reporting a person threatening suicide. Officers responded to a residence in the 1300 block of West Navajo Drive, where they found 23-year-old Gerald Dimas Luna II threatening suicide while outside the residence armed with a weapon. An officer shot the man, who was then airlifted to a local hospital, where he was pronounced dead at 8:08 p.m.

Two Helena teenagers died in a car wreck at the intersection of Highway 25 and Shelby County Road 42 Dec. 11 at approximately 6:35 p.m., according to Calera Police Chief Sean Lemley. The two-vehicle crash caused the death of Nathan Dunn, 16, of Helena, who was pronounced dead at the scene. Amber Parks, 14, of Helena died the morning after the crash on Dec. 12.

Chip Lindsey, Troy University quarterbacks coach, has been approved as the new head football coach at Spain Park. Lindsey was approved Dec. 13 at a Hoover City Schools board meeting.

Pelham resident Jerry Shelton Hoggatt, 73, died Dec. 16 after the plane he was riding in crashed in the Colorado mountains. The crash happened at about 4 p.m. on Dec. 15 when a Beech B-60 airplane piloted by Brownwood, Texas, resident Barton Harris crashed into a snow-covered mountain about 5 miles north-northwest of Edwards, Colo.