Hornets fall to Cavs in semifinals 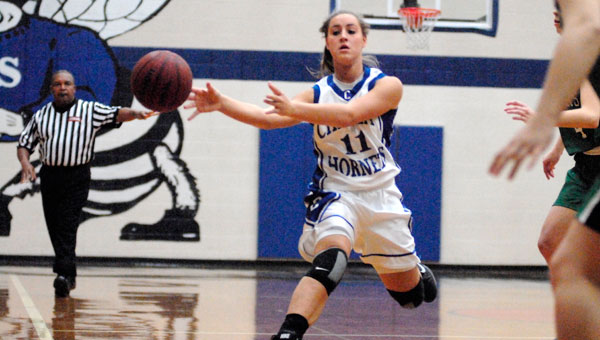 Chelsea High School guard Allie Luster passes the ball to a teammate in the Hornets' 52-43 loss to John Carroll in the Hoops for Hope tournament semifinals Dec. 30. (Reporter Photo/Wesley Hallman)

Trucks knows the Hornets are in trouble if their opponents are having their way.

John Carroll Christian came out after halftime and turned up the heat on Chelsea as the Cavs advanced to the Hoops for Hope tournament championship game Dec. 30 following a 52-43 win over the Hornets.

John Carroll outscored Chelsea 19-6 in the first eight minutes of the second half of the semifinal contest.

“They made us play a pace we weren’t really comfortable with,” Trucks said. “They were a physical team and we lost our composure.”

Chelsea, which trailed for the majority of the first half, took a 21-19 lead into the locker room at halftime following a layup by Winters with 36 seconds remaining in the second quarter.

John Carroll ended the third quarter with an 11-0 run to take a 38-27 lead into the final period.

Chelsea started the fourth quarter with a 6-0 run, capped by a layup by Mock, and cut the Cavs’ lead down to five points on three separate occasions down the stretch.

The Hornets cut the lead to four points at 47-43 with 49 seconds left in the game following two free throws by Luster, but Chelsea couldn’t make it a one-possession game.