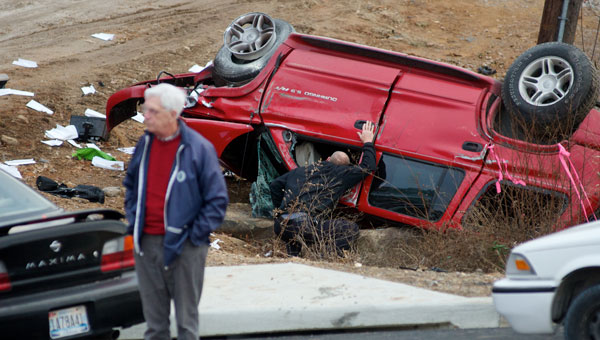 Emergency responders inspect a crash near the intersection of Old Montgomery Highway and Riverchase Parkway in Hoover on Dec. 30. (Reporter Photo/Jon Goering)

HOOVER – A driver attempting to escape a possible traffic violation ticket may end up facing more serious charges after causing a two-car wreck on Old Montgomery Highway on Dec. 31.

Cpl. Steve Smith, a public information officer with the Alabama State Troopers, said a state trooper attempted to pull over Jayme Wilson, 48, of Bessemer on Valleydale Road in Hoover for a traffic violation.

Wilson refused to stop her red Dodge Durango and a pursuit began. After Wilson turned onto Old Montgomery Highway, she lost control at a sharp curve, hitting a black Toyota Camry driven by 59-year-old Cynthia Scott of Helena.

Smith said both Wilson and Scott were taken to the hospital. He said as of Jan. 3, he was unsure of the extent of their injuries, but neither had life-threatening injuries.

Charges are pending for Wilson.

Dr. Robert Bentley campaigned in Columbiana during his run to the governor's mansion. (File photo) FROM STAFF REPORTS We continue... read more