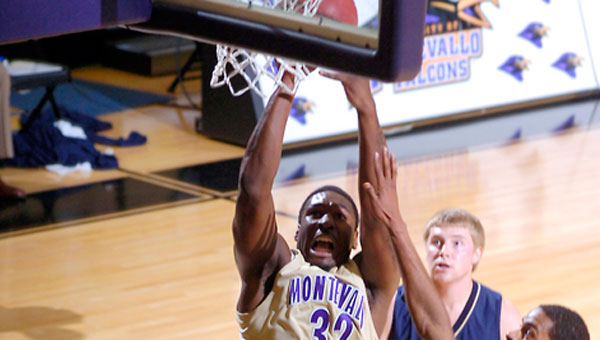 University of Montevallo senior Cecil Coleman recorded a double-double with 12 points and 13 rebounds in the Falcons' 73-66 loss to Christian Brothers University in a non-conference game Dec. 30. (Contributed)

The University of Montevallo men’s basketball team suffered its second loss of the season to Christian Brothers University following a 73-66 defeat Dec. 30 in Memphis, Tenn.

Montevallo, which entered the contest ranked No. 9 in the National Association of Basketball Coaches’ NCAA Division II poll, was led by junior Antoine Davis. Davis scored a season-high 24 points to lead all scorers in the game.

The Falcons and the Bucs battled closely for the first 10 minutes of the game, as neither team gained more than a three-point lead.

Montevallo suffered an 11-minute cold streak from the field and scored just four points in the final 11 minutes of the first half, which allowed the Bucs to outscore the Falcons 24-4 down the stretch and take a 37-18 lead into halftime.

The two teams traded baskets in the opening minutes of the second half, which did not help the Falcons’ cause as Montevallo continued to trail by double-digit points. With 4:13 left in the game and Montevallo down 59-42, the Falcons went on a 10-2 run to cut the Bucs’ lead to just nine points.

Christian Brothers responded with a layup and then forced a turnover, which led to a dunk, to regain a double-digit advantage.

Montevallo women fall on the road at West Alabama

The Falcons (4-7) took a 30-27 advantage into the locker room at halftime before West Alabama began the second half with a 6-0 run and led the rest of the game. The Tigers led by as many as 15 points in the second half.

Senior Kris Seigenthaler led Montevallo with 20 points on 7-of-13 shooting from the floor, including 4-of-6 from beyond the arc. Seigenthaler hit both of her free throws.

Junior Tiffany McClure added 14 points after hitting 4-of-9 field goals. McClure, who dished out a team-high four assists, hit 6-of-8 attempts from the charity stripe.

Parrott gave the Falcons their largest lead at 26-18 following a jumper with 4:38 remaining in the first half. West Alabama cut the Montevallo lead to three points heading into the break and erased the deficit early in the second half.