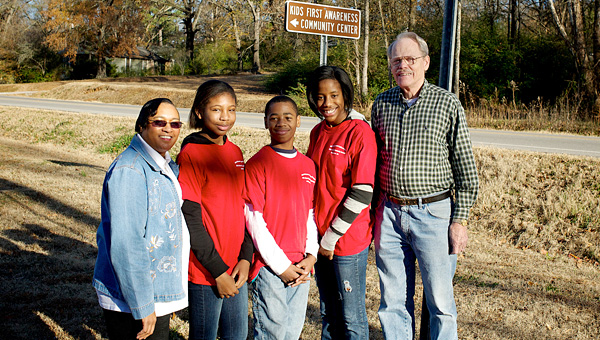 The kids first combed maps of their hometown, and found no road in Alabaster named after the Civil Rights icon. They then moved on to maps of their county, and again found no such road.

“I called up a 911 operator and asked them if there was a Martin Luther King Jr. street anywhere in Shelby County,” said Cindy Hawkins, executive director of Kids First. “At first the kids didn’t believe me, so they made me call the 911 operator again so they could hear it.”

About one year after the children first studied Dr. King’s life, they are taking the last steps in their long journey to forever bond King’s name with Shelby County’s largest city.

On King’s birthday, Jan. 15, members of Kids First, local residents and Alabaster city officials will gather at the Kids First Center on Mt. Olive Road before holding a prayer walk down Shelby County 11.

Participants will meet at the Kids First Center before walking down Shelby County 11 to its intersection with Mt. Olive Road. Once the prayer walk reaches the intersection, the city and Kids First will unveil an addition to Mt. Olive Road, dedicating it in honor of Martin Luther King Jr.

The sign, which will be placed on the Mt. Olive Road sign post, will read “Dedicated to Dr. Martin Luther King Jr. by the children of Kid’s First.”

Two days after the prayer walk, Kids First will also host a basketball tournament between its members and local officials, teachers and pastors at 1 p.m. at the Shelby County Instructional Services Center near the intersection of U.S. 31 and Shelby County 11.

“This is not just good for Kids First, this is good for Alabaster and Shelby County,” Hawkins said. “This (road dedication) is something the kids have been working on from January of 2010 up until today.

“This is part of the kids’ service learning project. It was their idea, and they have led the way,” Hawkins added. “The youth are leading this on (Dr. King’s) birthday.”

When the children first began talking about renaming the street, Hawkins said she was skeptical.

“They stayed on me, and had me cornered. I had to come out boxing,” she added.

After Hawkins contacted Alabaster about the project, children at Kids First created a PowerPoint presentation and showed it to the City Council. In October 2010, the city approved the street’s name dedication and created signs to unveil at the Jan. 15 event.

Because the Kids First members oversaw and directed the road dedication project, it gave them valuable real-world skills they can use later in life, Hawkins said.

“If 13-,14- and 15-year-olds are able to work with their city to get something done now, it opens their minds up to new realms. They can do anything,” Hawkins said. “Fifteen, 20 or 30 years from now, they can ride by that street and say ‘I had something to do with that.'”

Mike Reid, a firefighter with the Pelham Fire Department and the Fire Marshal in Montevallo, hops into the truck at... read more