Alabama Telco and March of Dimes 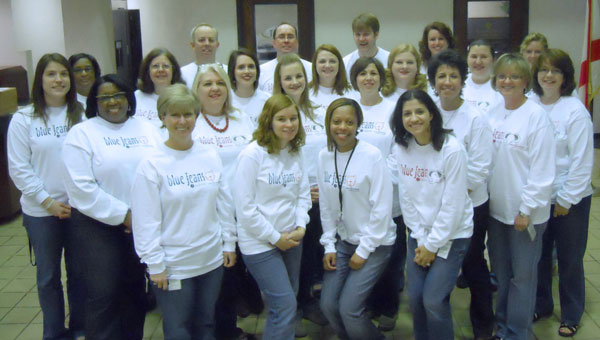 The event and gave organizations and individuals in Alabama an opportunity to wear a Blue Jeans for Babies T-shirt along with jeans or khakis to work.

Alabama Telco employees participated in the event and sold over 800 T-shirts. By purchasing a T-shirt, participants not only showed their support for the March of Dimes’ fight in improving the health of babies and preventing premature birth, but they also showed how much they care about local families and babies. In addition, this year’s event and T-shirts focused on team spirit for the two biggest colleges in the state. Participants wore a baby elephant or baby tiger to show their support for the March of Dimes and their college team of choice.

In addition to being the Presenting Sponsor for Blue Jeans for Babies, Alabama Telco has also partnered with the charity on various smaller events throughout the year. “It has been a truly amazing experience to see Telco’s dedication to this worthwhile cause. It has been even more rewarding to see how well our efforts paid off. We hope we not only raised funds but awareness of premature birth and all the wonderful things The March of Dimes is doing to prevent it,” states Stanton Davis, Alabama Telco’s Vice President of Marketing.

“Alabama Telco has supported our Blue Jeans for Babies event for several years in Alabama, providing service, time and commitment to the event across the state. Alabama Telco and their staff have provided tremendous support and resources in support of the March of Dimes mission. We thank them for their tireless efforts and for being good stewards of the organization,” states Melanie Mooney, North Central Division Director for the March of Dimes.

Verizon Wireless has donated $2,500 and 1,800 prepaid phone cards to the Alabama Coalition Against Domestic Violence (ACADV) and its... read more