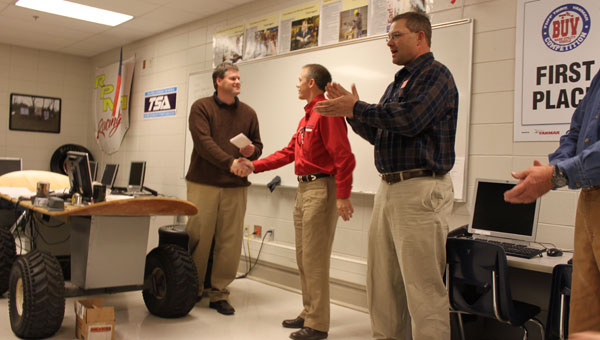 Now, he has MagnoliaLand Entertainment’s interest in producing a documentary and the help of generous donors to turn his idea into a realistic opportunity for his students.

Martin Marietta Materials, a limestone production company based in Raleigh, N.C., received word from Copes about his idea.

Copes’ e-mail quickly passed from corporate to district offices, and District Manager John Stalcup and plant managers Rich Knizner and John Henderson decided to make a visit during Calera’s school hours to surprise the engineering students with a check.

As Stalcup presented the $1,500 check to Copes, Knizner told the high schoolers, “Y’all are taking something from an engineering standpoint and making it practical. So many times in our education, we don’t translate what we’re learning into how we can apply it to the world. I commend y’all.”

Juniors T.J. Killingsworth and Kyle Brasher have been in the program since they were freshmen. They’re now leaders on the Basic Utility Vehicles team, and are looking forward to seeing their hard work put into action.

They also created a four-wheel-drive ambulance with a fold-down seat to carry a stretcher.

“We made a four-wheel drive ambulance so it can get everywhere. It’ll make it more beneficial to the people,” Brasher said. “I want to go to see if people use the vehicles, and how they use them.”

This type of education has the boys thinking outside the classroom walls.

Austin Wright, a 15-year-old 10th grader, has been in the program since eighth grade. Wright emphasized the need for reliable transportation overseas.