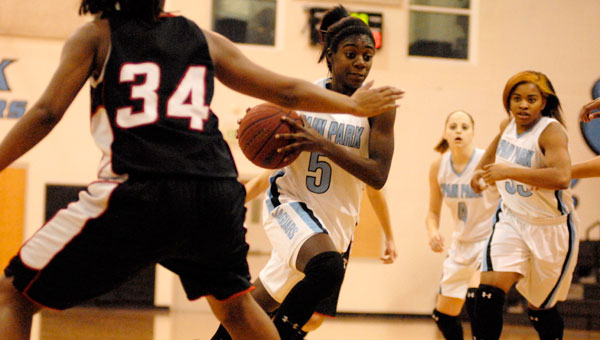 HOOVER — Spain Park High School senior forward Colby Ryan nailed a 3-point basket from the left wing with just more than two minutes left for her first points of the game in a Jan. 4 home contest with Thompson.

The deep bomb gave the Jaguars a 45-43 lead, their first lead since a 2-0 lead in the opening minute.

Ryan’s second and final bucket with 1.8 seconds remaining lifted Spain Park to a 49-47 last-second victory over the Warriors.

“It wasn’t my best shooting night,” Ryan said, “but I pulled through when we needed it.”

Ryan’s last-minute heroics impressed Shelton State Community College women’s basketball coach Madonna Thompson, who was waiting to speak with Ryan following the Jaguars’ victory. Ryan, who finished with five points on 2-of-10 shooting from the floor, hit the second game-winning shot of her high school career.

Jessica Freeman led Spain Park (12-8) with a season-high 21 points on 6-of-13 shooting from the floor, including 3-of-9 from beyond the arc. Freeman also hit all six of her free-throw attempts.

Ryan’s game-winner outshadowed Thompson forward KaDeisha Stowes, who led the Warriors (7-7) with a season-high 24 points. Stowes finished 7-of-10 from the field and 10-of-12 from the charity stripe.

Stowes, who scored 14 points in the opening half, also grabbed a team-high 17 rebounds in the loss.

Stowes scored seven points in the first quarter to help the Warriors jump out to an early 12-7 lead. Her offensive rebound and putback gave Thompson its biggest lead at 25-14 with 2:35 remaining in the first half.

Spain Park chipped away at the lead throughout the third quarter before tying the game following a 3-pointer by Freeman early in the fourth quarter. The two teams traded the lead a couple of times before Ryan’s game-winner with less than two seconds remaining.