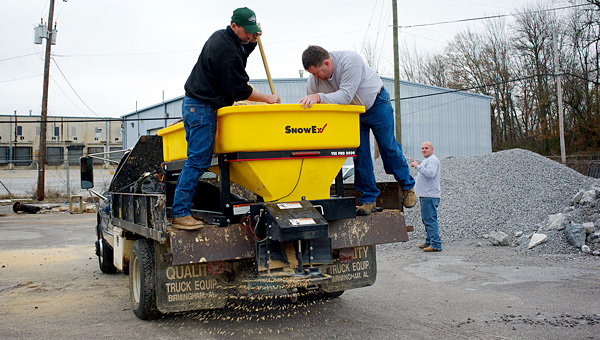 Phillip Savage, left, field supervisor for the Pelham Street Department, and Justin Martin, Street Department laborer, work to get the damp sand to go through the machine that spreads the sand on the road while laborer Chris Griggs looks on Jan. 5. (Reporter Photo/Jon Goering)

Every time the National Weather Service forecasts rain mixing with below-freezing temperatures in Pelham, Mark Keith knows where he and his employees likely will be during the upcoming late-night or early morning hours.

Keith, the director of the Pelham Street Department, has been around long enough to know the city’s ice trouble spots, and he knows how important it is to have a truckload of sand ready to go.

“Before the weather gets bad, we are keeping an eye on it,” he said. “We actually rely on the police and fire department to be our first responders. If they see an icy spot, they will block that spot off and direct traffic if they need to until we can get out there.”

“You want to have that truck loaded and ready to go,” added Pelham Public Works Director Eddy Jowers. “You don’t want to have to take the time to get everything ready after the roads have already frozen.”

Over the past few weeks, the city has made a “handful” of calls to icy problem areas in Ballantrae, Kings Crest in the Weatherly subdivision, the Indian Hills subdivision and several bridges, like the one on Crosscreek Trail over Buck Creek.

“We have two or three spots that we know will tend to ice pretty easily,” Jowers said. “We are vigilant as far as knowing the icy weather is approaching and preparing for it.”

Because the Street Department normally works from 7 a.m.-4 p.m. each day, Jowers and Keith depend on calls from citizens, firefighters and law enforcement personnel during nighttime hours.

“We have 24-hour service. There is a crew that is always on call,” Keith said. “If we get a report of an icy road in the city, we will contact the (road) supervisors for those areas and they will go sand it immediately.”

“We have a system in place where someone is always on standby,” Jowers said. “But most of it is just watching and being prepared.”

The city’s street department does not cover roads under state or county jurisdiction, like Interstate 65 and U.S. 31, but does offer aid to those agencies when necessary.

“It may be a situation where they are running low on sand, or the county may have a stop sign knocked down and we will replace it for them,” Jowers said. “That’s one of the big blessings we have. We are able to work cooperatively with the county and the state.”

Keith and Jowers said they do not sand the city’s roads frequently, because temperatures must be below freezing for an extended period of time before mixing with rainfall.

Keith said many expected the city to spread tons of sand during the Christmas weekend snowfall, but the streets and bridges were too warm to freeze.

“The rain really helped us out last time it snowed. We distributed sand in a few areas, but it wasn’t too bad,” Keith said. “As long as the roads are above freezing, they won’t ice.”

“Just because the air freezes, the roads may be warm enough that they don’t freeze,” Jowers said. “If the roads are 34 or 35 degrees, it just melts where it hits.”

But even if there is only a slight chance of roads icing, the department prepares to hit the streets at any hour of the day.

“The biggest thing is just being vigilant and ready to respond,” Jowers said. “Fortunately, we have never had any catastrophes due to us not paying attention.”

Our intentions were the best. However, you know what they say about good intentions. In discussions in our building about... read more