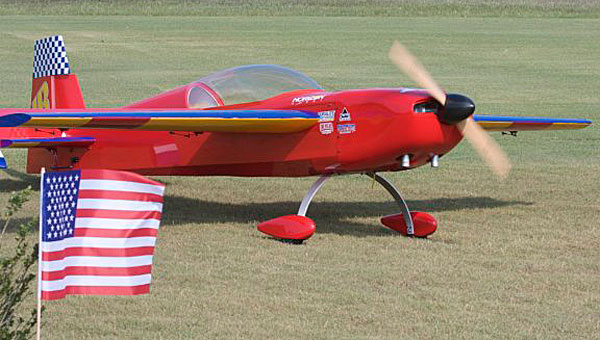 Members of the Alabaster Radio Control Association have been filling Shelby County's skies with realistic aircraft for decades. (Contributed/ARCA)

When Greystone resident Don Wasden was a child in the 1940s, he, like many youth during the World War II era, could not get enough of building model planes.

As well-known combat aircraft such as the P-51 Mustang and the B-24 Liberator streaked across the skies of Europe and the Pacific Ocean, Wasden and his friends constructed miniature versions of the same planes in their bedrooms and at their kitchen tables.

“I am one of what they call the old timers,” Wasden said. “When I was a kid in the ‘40s, I made model planes pretty regularly.

“Back then, I guess we thought bigger of airplanes,” he added.

As Wasden grew out of his childhood, he also grew out of the model plane hobby for many years. But a gift from his family in the early 1980s sparked a renewed interest in a different form of miniature aircraft.

“I didn’t touch one for many, many years,” Wasden said. “But then my son and son-in-law got me a radio control plane kit in the early ‘80s.

“They got me the kit, but not the motor. They were willing to get me the small investment, but they left out the big investment,” Wasden added, laughing.

Since then, Wasden has been frequenting radio control airplane strips with the Alabaster Radio Control Association, and has enjoyed building the powered aircraft for nearly three decades.

“I like building planes that look like real planes,” Wasden said. “I am building a P-51 right now, and I have a P-47 that I like to fly.”

When Wasden first became involved in the Alabaster club, the organization used a small strip off Shelby County 91 on land owned by U.S. Steel.

However, a land donation about seven years ago gave the club a more convenient location off U.S. 31 between Alabaster and Calera.

“I think it was a piece of property they were saving for some ball fields, but the land was real swampy,” Wasden said of the Alabaster land, which now houses a grass runway and a shed for those controlling the small planes.

Over the years, Wasden has seen the radio-controlled planes’ power source and designs evolve several times.

“When I first got into it, everything was powered by glow plugs. You had to have a special kind of fuel to run those,” he said. “Then they moved on to gas-powered engines. When they did that, the planes got as big as automobiles.

“Now a lot of them are electric,” Wasden added. “Those are a lot cleaner, because there is no fuel or exhaust.”

Radio-controlled model kits are becoming uncommon today, as many hobbyists are electing to purchase “ready-to-fly” or “almost-ready-to-fly” planes, Wasden said.

Many who enter the hobby are interested in flying vintage low-wing planes like the P-51, but Wasden urged beginners to start off with more traditional high-wing planes.

“A lot of people, especially those who are older, will want to fly the P-51 right off. But those low-wing planes are too critical. They are too responsive,” he said. “They will get to fly them maybe once.

“And these planes crash pretty often, so don’t get too attached to them,” Wasden added with a laugh.

For more information about the Alabaster Radio Control Association, visit Alabasterrc.com, or attend one of the group’s meetings on the first Thursday of every month at 7 p.m. at the Thompson Intermediate School library.

Christmas season bust for some, boom for others