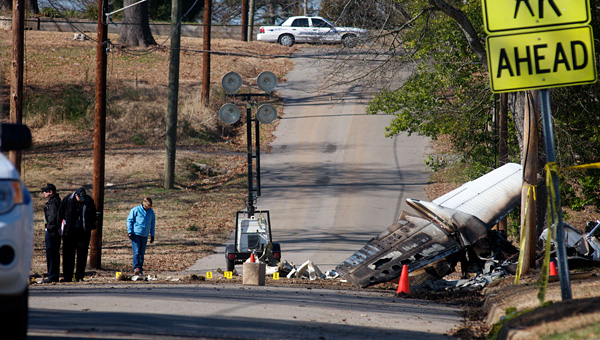 Gene Scott, 59, owner of Pee Wee’s Pawn Shop off U.S. 31 near the Chandalar subdivision in Pelham, died after his multi-engine Beech BE58 aircraft crashed near the intersection of Seventh Avenue North and 80th Street in Birmingham at about 7 p.m.

According to FAA records, the aircraft was registered to Sutter’s Mill Gold and Jewelry, which is also known as Pee Wee’s Pawn Shop. 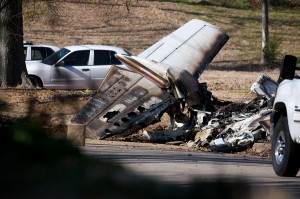 The wreckage of the crashed plane sits on 80th St. N. in Birmingham near the airport. (Reporter Photo/Jon Goering)

The aircraft was declared airworthy in 1981, and was en route from the Morristown Municipal Airport in New Jersey to the Shelby County Airport when it crashed, according to FAA records.

The pilot was in contact with the air traffic control tower at the Birmingham-Shuttlesworth International Airport at the time of the crash, but did not sound panicked or report any problems shortly before the crash, said National Transportation Safety Board Senior Air Safety Investigator Bob Gretz.

“The pilot was in contact with the Birmingham tower, and did not report any type of problem,” Gretz said, noting Scott did not issue a distress call before the crash. “He did not appear to be in a panicked state.”

Because the Shelby County Airport does not have its own control tower, all air traffic landing and departing the airport is handled by the Birmingham tower.

“He elected to divert after obtaining the weather report at (the) Shelby (County Airport),” Gretz said. “He called the air traffic controller and said ‘I’ve checked the weather at Shelby, and I’d rather go to Birmingham.’”

Investigators left the crash undisturbed until Jan. 6, when a Georgia-based company collected the wreckage and transported it to Atlanta to store while the NTSB examines it, Gretz said.

“A preliminary (crash) report will be available within five to 10 business days,” Gretz said. “A final report, which has a probable cause attached to it, will be released in 10 to 12 months.”

Alvis Louie Armstrong, Sr. Shelby On the morning of Jan. 5, Alvis Armstrong, or as he was more affectionately known... read more