A new day for at-risk students 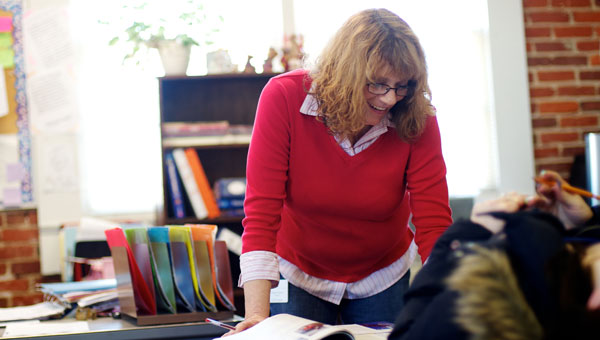 DAY Program teacher Kathy Sellers laughs with a student during class on Friday morning, Jan. 7, in her classroom in Alabaster. (Reporter Photo/Jon Goering)

ALABASTER – When Mike Blackwell walked into the offices of the DAY Program 28 years ago, he knew he’d found where he belonged.

The DAY Program is a long-term alternative program for at-risk Shelby County students who need academic or behavioral counseling.

Blackwell, now the DAY Program director, had been a teacher and a retail manager, but hadn’t found satisfaction in his career choices. One day with the DAY Program three decades ago changed everything.

“I immediately fell in love with the concept,” he said of his first experience with the program in January 1983. “There’s people that care about these kids, and there’s kids that are given a shot. Yes, these kids have trouble reading, but there’s a chance they’ll make it.”

Much has changed in the three decades since, but the DAY Program’s goal remains the same.

“Our goal is to get a child and get them back in a school to graduate,” Blackwell said. “We have a success plan that we put in place for each student that comes in, with academic and behavioral goals.”

Students are referred through Shelby County Schools counselors or administrators, or through court officials or probation officers. DAY Program students are typically seventh-graders through 11th-graders. Students cannot graduate from the DAY Program, so Blackwell and his instructors focus on getting students back into their home schools before their senior year.

Each student at the school has his or her own educational plan, so different students in the same class may be studying at different levels.

“The math class might be doing seventh grade math, eighth grade math, algebra and geometry,” he said. “(The teacher) can’t stand up there and teach because there might be seven different things going on at the same time.”

The school can have up to 60 students, with one teacher and one counselor for every 15 students. Blackwell said the school now has around 55 students.

The DAY Program operates on a budget of around $600,000 per year, with funding coming from the Shelby County Board of Education, the United Way, the Department of Youth Services and the Shelby County Commission.

Blackwell said the successes he’s seen at the DAY Program, such as a former female student who is now a nurse at Vanderbilt University Medical Center and two former male students who opened their own businesses, keep him going every day.

“There’s lots of successes all the way around. They learned something, they made some progress,” Blackwell said. “To me, if the kid makes progress and is earning credits, that’s success.”