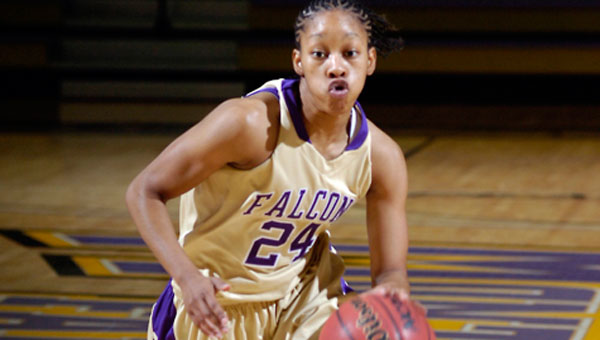 The University of Montevallo women’s basketball team picked up its first Peach Belt Conference win of the season Jan. 8 in dominating fashion as the Falcons defeated Georgia Southwestern State University, 71-45.

The Falcons took a commanding halftime lead after outscoring the Hurricanes 38-12 in the first half.

Young was nearly perfect as she hit 6-of-7 shots from the floor, grabbed five rebounds and dished out three assists.

Seigenthaler was 5-of-8 from the field, including a perfect 3-of-3 from 3-point range. McClure hit 6-of-7 shots from the floor while dishing out four assists.

Montevallo outscored the Hurricanes 19-9 in the opening 10 minutes of the game. Following a Georgia Southwestern jumper at the 9:28 mark of the first half, the Falcons went on a 19-1 run to end the half leading 38-12.

Montevallo went on a 14-2 run over the first four minutes of the second half, powered by eight points from Seigenthaler, who nailed a pair of 3-pointers. Up 52-14, the Falcons coasted the rest of the game and took their largest lead at the 10:40 mark as Harris hit a jumper to put the Falcons ahead 63-23.

The Falcons, who entered the contest ranked No. 19 in the latest National Association of Basketball Coaches’ Division II poll, once again ran into a hot-shooting team. The Hurricanes hit 75 percent of their shots in the second half to finish with a 51.2 percent shooting percentage for the game.

Juniors Antoine Davis and Ryan Westbrooks led the Falcons with 13 points each.

The Hurricanes built their lead to 20 points at the 13:30 mark of the second half. The Falcons responded with a 12-4 run, sparked by a Westbrooks’ 3-pointer. The Hurricanes were able to respond with a 6-2 run to retake a 16-point lead with just five minutes to play.

The Falcons were able to cut the Hurricanes’ lead to under 10 points with 31 seconds to play as they trailed 64-55, but couldn’t get any closer in the final minute.

Montevallo picked up an impressive 98-76 win over the University of West Florida on Jan. 4.

The Falcons shot 62.5 percent from the field and put up its highest point total of the season. Montevallo was nearly perfect from the free-throw line, hitting 23-of-26 from the charity stripe for an 88.5 shooting percentage.

Westbrooks led the Falcons with 25 points. Westbrooks hit 9-of-12 shots from the field and was a perfect 5-of-5 from the free-throw line.

Davis scored 21 points while hitting 8-of-11 shots from the field and going a perfect 5-of-5 from the charity stripe. Davis also tied for the team lead in rebounds with four boards and recorded three steals.

Coleman chipped in 17 points while hitting 5-of-8 shots and going a perfect 6-of-6 from the free-throw line.

The Falcons held the Argonauts to just 46.7 percent shooting and forced 19 turnovers.

The Falcons coasted in the second half as they led by double-digits the entire period. Montevallo’s largest lead came at the 9:41 mark, as Westbrooks hit a pair of free throws to put the Falcons ahead by 25 points. The Argos cut the lead to 15 points late in the half before Montevallo closed the game with an 8-1 run.

“I’m extremely proud of what our players have achieved throughout the year,” said Montevallo men’s soccer coach Ken Hassley. “The University of Montevallo provides a tremendous blend of outstanding academics and elite athletics. We build our teams around players that are incredibly talented and highly motivated then challenge and encourage them to strive for excellence in all that they do. By earning this award, it is clear that our players are succeeding as true student-athletes.”

Pualic was named a second team midfielder and was the only Peach Belt Conference representative on the list.

Pualic was a member of the PBC All-Academic Team both this season and last. He was named to the PBC Presidential Honor Roll last season and was selected to the GSC Honor Roll his sophomore and freshman seasons.

University of Montevallo senior Cecil Coleman recorded a double-double with 12 points and 13 rebounds in the Falcons' 73-66 loss... read more