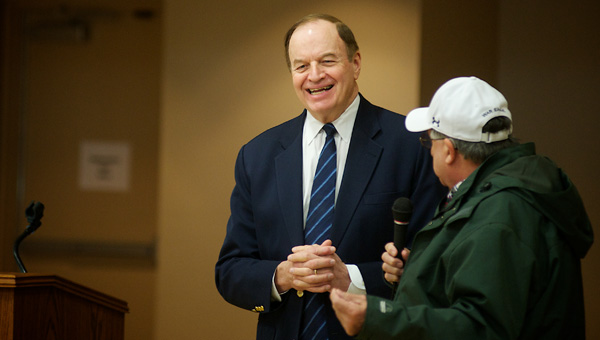 US Senator Richard Shelby, R-Ala., laughs during a question by an audience member during the forum in Helena on Jan. 12. (Reporter Photo/Jon Goering)

HELENA — Senator Richard Shelby, R-Ala., spoke to a crowd of county residents in the Helena Community Services Building Jan. 12 on issues facing the country including the national debt, tax reform and government spending.

Shelby addressed the crowd at 10 a.m. under the surveillance of several Helena police officers who stood guard at each door of the building and on each wall.

Shelby said speaking engagements such as the one in Helena are part of his commitment to Alabamians to hold a meeting in each county of the state every year. He said he will continue to hold public meetings despite the recent shooting of an Arizona congresswoman at a similar meeting.

During his address to the crowd, Shelby first thanked residents of Shelby County for giving him 83 percent of the vote for his fifth term in office.

“I’m grateful for that and for your support,” he said.

Shelby addressed the economic state of the nation, citing overspending and under-saving as the reason behind the nation’s $14 trillion deficit.

“We’re on the road big-time to financial destruction,” he said. “With that we’ve got some challenges in Washington D.C. we’ve never had before. If we don’t get our finances in order this country as we know it will be gone.”

Shelby said the key to reducing the debt is to cut government spending, which he is willing to do.

“I’m willing as your senator to do some tough things,” he said. “We should look at every program and say ‘What’s essential for this country?’ We’re going to have to do some cutting and I’m willing to do that.

“I believe we should go back to the 2008 budget,” he added. “Will we be cutting across the board? Absolutely. Will we be making people mad? Absolutely. You can count on me. I’m going to make some votes that are tough votes.”

After Shelby’s address, he took questions from the audience addressing his opposition to Trouble Asset Relief Program (TARP) funds and government-run health care. He also addressed his stand on immigration laws in response to several questions. 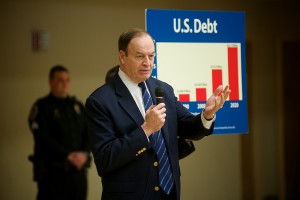 US Senator Richard Shelby, R-Ala., discusses the national debt during the forum in Helena on Jan. 12. (Reporter Photo/Jon Goering)

“We all came from immigrants but we have laws and they’re not enforced,” Shelby said. “I believe we have more illegal immigrants here than they say we do. If we don’t enforce our borders and enforce our laws we won’t have a nation of laws. I have voted and will continue to protect the strongest measures we have.”

When asked about his “pork barrel spending”, Shelby said, “I don’t know a project in Alabama that I’ve funded that I’m not proud of.”

Randy Hillman, executive director of Alabama’s District Attorneys Association, thanked Shelby during the question and answer session for funding for new forensic technology in the state.

“From the criminal side of things, our job is to protect you guys,” Hillman said. “We’re taking out the trash that no one else wants to deal with. The earmarks from Senator Shelby are not going to waste. We’ve solved cases we couldn’t without those funds.