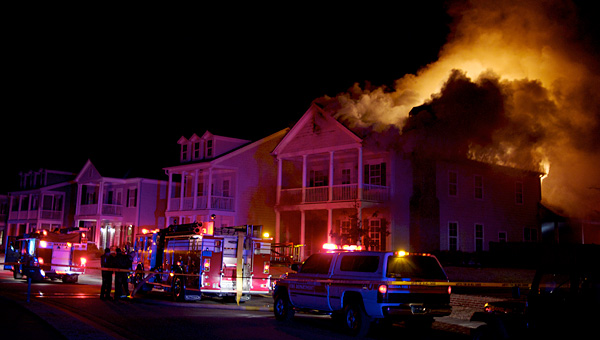 Fire severely damaged a two-story residence at 148 Appleford Road in Helena Jan. 12, but firefighters reported no injuries in the blaze.

The Helena and Pelham fire departments responded to the blaze at about 5:45 p.m. after someone called to report the blaze.

“Whenever we have a structure fire, it’s standard procedure for us to request a third engine from Pelham,” said Helena Fire Chief John Wilder. 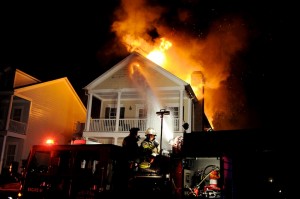 Firefighters from the Helena Fire Department battle a blaze at 148 Appleford Road in Helena on Jan. 12. (Reporter Photo/Jon Goering)

When firefighters arrived on the scene, they discovered much of the house consumed in flames, and determined the blaze had quickly spread from the first level of the house to the attic.

“We believe the cause of the fire is accidental, and we think it started down on the lower level (of the house),” Wilder said. “It spread to the attic very quickly, for some reason. It was a pretty good fire when we got here.”

Although the house was occupied when the blaze started, the residents were able to escape the residence without injury, Wilder said.

“Everybody got out just fine,” he said. “When we got here, it was so big that our main concern was making sure it didn’t spread to the neighboring houses.

“Our guys did a good job of getting in there and putting it out,” Wilder added. 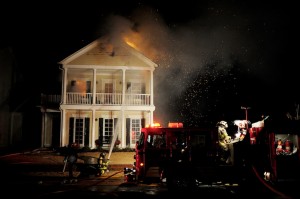 The departments were able to bring the blaze under control shortly after arriving, but firefighters remained at the scene several hours after the fire began.

At about 8:45 p.m., the residence was still billowing smoke, and firefighters were preparing to re-enter the house to investigate the fire’s cause.

The 25-degree outdoor temperatures had caused the water used to battle the fire to freeze to the streets and sidewalks surrounding the house.

“Now, we will get in there and start the investigation phase and try to pinpoint what caused it,” Wilder said. “Now, I’m going to go get these boys some coffee.”