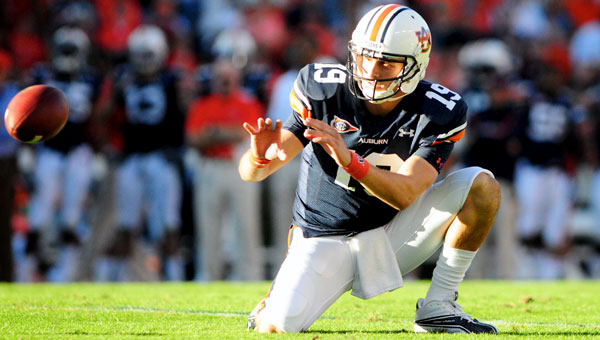 Most observers simply saw an Auburn University football player wearing No. 19 trot on the field in preparation to retrieve a snap and perfectly place it for the Tigers’ field-goal kicker in the 2010 Bowl Championship Series title game Jan. 10 at University of Phoenix Stadium in Glendale, Ariz.

To the mother of the player wearing jersey No. 19, Teresa Caudle, it was the execution of God’s plan.

While most in the stadium were sitting on their hands and others were biting their fingernails, Teresa already knew the outcome — a 19-yard game-winning kick to break a 19-19 tie and hand the Auburn Tigers their first national championship since 1957 following a three-point victory against Oregon.

“It really confirmed to me it was God’s plan,” Teresa said.

“I was excited,” Caudle said. “I wasn’t really nervous about the kick. Josh (Harris), Wes (Byrum) and I, we’ve done it hundreds of times.”

Teresa, who didn’t realize Neil translated as “champion” in Gaelic until after his birth, said she had no worries with her son on the field and three seconds left on the clock.

“When he’s on the field, I’m not worried about it,” Teresa said. “I’m so comfortable when he is on the field.”

The fifth-year senior, who redshirted during his freshman campaign in 2006, said he will never forget the final play of his collegiate career.

“It’s a dream come true to have my hands on the ball on the final play in the national championship game,” Caudle said.

Caudle, who was recruited to the school by the coaching staff under former Auburn coach Tommy Tuberville, saw three different offensive coordinators and two different head coaches during his time on the Plains. Caudle finally cemented his role on the team as a backup quarterback and starting holder for the Tigers’ special teams unit under current head coach Gene Chizik and offensive coordinator Gus Malzahn.

Teresa and her husband Keith celebrated the end of Caudle’s playing career with pride.

“I’m just so proud of him,” Teresa said. “He’s been through a lot of changes. Some coaches would have written (seniors) off as red-headed stepchildren, but this staff has been great. He contributed to something that will go down in history.”

Caudle, who successfully held the ball on two field-goal kicks and two extra-point attempts for Byrum, was one of five former Shelby County high school football standouts on the 2010 Auburn team.

Caudle, who visited Auburn with Shoemaker on a recruiting trip in 2005, said he and his fellow seniors have developed a life-long friendship.

“We’ve all become good friends over the years,” Caudle said. “Just the other day we looked back at a photo from our recruiting visit. It’s funny to see us then and now five years later.”