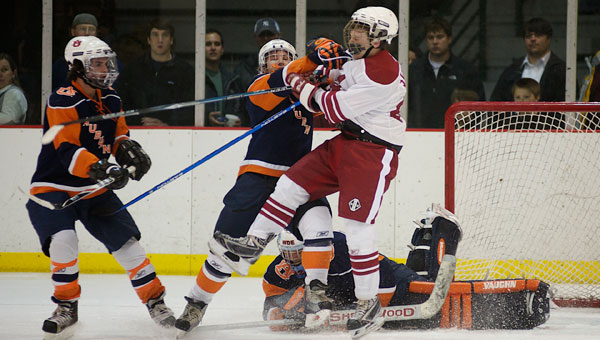 University of Alabama and Auburn University hockey players battle in front of Auburn's net during a Jan. 14 matchup at the Pelham Civic Complex. (Reporter Photo/Jon Goering)

The Sunday contest marked the final day of a three-game battle for the first Iron Cup trophy.

This year marked the first time the two schools have ever faced off against each other on the ice, and the crowd at the Pelham Civic Complex was energized throughout the weekend, said Alabama coach Mike Quenneville.

“It’s great to have everyone come out and support us,” said Quenneville, whose Frozen Tide team plays its home games at the Civic Complex. “It’s wonderful to have the kind of crowds we did.

“We had 3,000 people in here on Friday and Saturday night. You couldn’t find a seat anywhere,” Quenneville added. “I’m just happy for the kids who came out and really worked hard. I’m proud of how they played this weekend.”

Following the win, the Frozen Tide named freshman Zach Dailey, an electrical engineering major from Huntsville, its most valuable player of the weekend. Dailey scored five goals throughout the weekend, and provided 10 assists.

Following the game, the mostly crimson-clad crowd cheered as members of the Frozen Tide lifted the Iron Cup trophy into the air at center ice.

“This was the first ice Iron Bowl, so it was a big deal for us to get that trophy,” Quenneville said.

An aggressive offense and several key saves by Alabama goalie Tyler French helped lift the Frozen Tide over Auburn during the Jan. 16 game.

Alabama scored twice in the first 2:04 of the game, as Scott Kline and Dailey each found the Auburn goal to put the home team up 2-0.

About three minutes later, The Frozen Tide extended its lead to 3-0 on an Alex Dubrinsky goal.

Auburn answered back a little more than a minute later when Trevor Hightower set up Pete Leone for the goal, bringing the score to 3-1.

After Alabama freshman Christopher Schmidt had to be helped from the ice after coming down hard on his leg, four more Tide players added goals before the end of the first period.

Kline scored the first, before Brandon Butler and Sam Bodner set up Dailey for a goal. Dubrinsky scored the next, before Adam Setas found the goal again to bring the score to 7-1 at the end of the first period.

In the second period, Tide players Ryan Barletta and Brandon Butler assisted Tanner Himmelman in connecting with a goal shot to extend Alabama’s lead to 8-1.

Bodner then added two more goals in less than 30 seconds to bring the game to 10-1.

Auburn’s last goal came when Hightower found the goal with about 5:30 left in the second period to bring the score to 10-2.

With less than a minute left in the second period, Himmelman scored again during an Alabama power play.

In the third period, Alabama broke a more than 18-minute scoring drought when David Mosier set off the horn for the final time in the game, locking the score at 12-2.