Bentley sworn in as 53rd governor 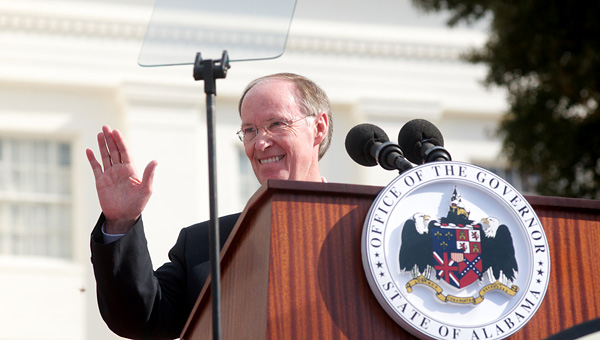 Governor Bentley greets the crowd after taking the podium to deliver his inaugural address during the ceremony on Jan. 17. (Reporter Photo/Jon Goering)

MONTGOMERY – Only 60 miles from his hometown of Columbiana, Shelby County native Robert J. Bentley was sworn in Jan. 17 as the 53rd governor of Alabama.

Bentley and other state elected officials took the oath of office on the steps of the state capitol building at noon following an inauguration parade in downtown Montgomery.

With his right hand on the State Bible, Bentley swore to uphold the constitution of both the state and the country.

Following a 19-gun salute, Bentley addressed the crowd on his gratitude, the transfer of power and his plans for the future.

“Today as I take the oath of office as the governor of the state of Alabama, I will never forget no matter what my official title may be, I will always be a servant of the people,” Bentley said.

“I am no longer the republican candidate for governor. I am the governor of all Alabama. That includes republicans and democrats. It includes young and old, black and white, rich and poor. My goal is to make all our lives better together.”

Bentley thanked former governor Bob Riley for his accomplishments in the last eight years, including recently starting the processes for what Bentley called the “toughest ethics package in the country.”

Bentley said he will take a cue from the 2010 elections on how to begin governing the state.

“The 2010 elections showed that people are fed up with business as usual, with partisan politics and with the federal government,” he said. “They want action not argument. They’re looking to state government to find leadership.
“We will look to the federal government when we can but they will not dictate out every move,” he added. “I’ll defend our right to govern ourselves under our own laws.”

Bentley said his first goal as governor is returning quality jobs to Alabama. He said creating jobs through the private sector is the first step to correcting many of the challenges that face the state.

Bentley reaffirmed his promise to not accept a paycheck as governor until the state is at full employment.

“When Alabama is at full employment it will mean that along with a job, we have restored citizens with hope and purpose,” he said.

After thanking his family and staff, Bentley promised to work for the good of the state and always remember his role as a public servant for the people.

“I truly believe Alabama’s best days are ahead,” he said.