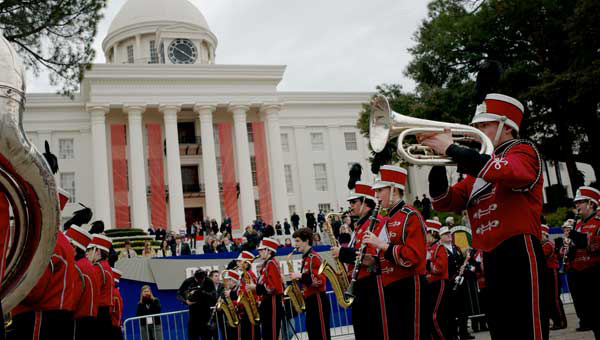 The Thompson High School marching band marches past the capital building during the inauguration parade on Jan. 17 in Montgomery. (Reporter Photo/Jon Goering)

“The Pride of Shelby County,” along with the marching bands from Chelsea and Thompson high schools, was invited to play in the inauguration parade that included floats and bands from high schools and universities across the state.

“I think it will be really cool for the kids to see that many people lining the street,” Grigsby said as the students entered the parade’s staging area. “I hope it shows them you can be from anywhere and still reach your goals.”

As Bentley’s alma mater, the school’s band was asked to be the leading band in the parade. Grigsby said the students were particularly excited to represent Bentley’s hometown.

Other families from Shelby County made the trip to Montgomery to witness the swearing in of the new governor and participate in the day’s festivities including that included the parade and a celebration afterward.

Rebecca Krueger from Calera brought her teenage daughter and nieces to the events to celebrate the inauguration and learn about the state’s government, she said.

“We had gone to the last two presidential inaugurations and we realized the importance for our girls to be here and witness this, that we can transfer power so peacefully,” Krueger said. “It was a great experience. The parade was great and so were the speeches. They made a lot of promises and I hope they keep them.”

Many of Bentley’s extended family members from Columbiana also made the trip to Montgomery to watch as their relative was sworn in to office.

David Nolen, Bentley’s nephew, said he attended all of the day’s events including the celebration at Montgomery Biscuits Baseball Stadium immediately following the inauguration and the Inaugural Ball later that evening. Nolan said he was able to speak with and congratulate his uncle at a prayer breakfast before the inauguration.

“It’s just a great thing for our family,” he said. “It’s not every day that someone so closely related to you gets to have this kind of ceremony. You know most governors are lawyers or come from wealthy families. This is just a great example of someone who came from the common folk and we’ve enjoyed getting to see it.”