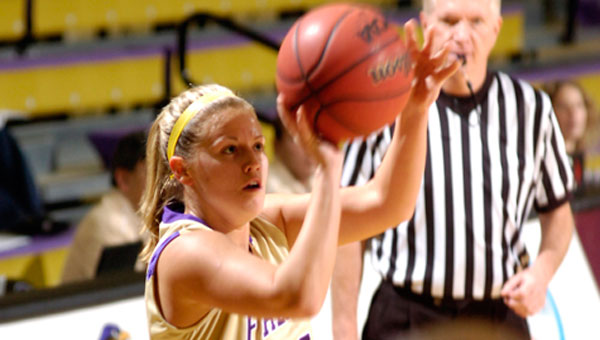 The Falcons improved to 6-0 at BankTrust Arena following the Jan. 17 victory.

The Falcons outrebounded the Pirates 41-31, including a 16-6 advantage in offensive boards. Those 16 offensive rebounds allowed Montevallo to hold a 25-4 advantage in second-chance points.

The Falcons went on a 12-0 run late in the first half, powered by five points from both Welch and Parrott, and took a 36-22 lead into the locker room at halftime.

The Pirates opened the second half with a 15-7 run to cut the Falcons’ lead to just six points, but a 3-pointer from Seigenthaler sparked a 9-0 run to help Montevallo retake a 15-point advantage.

The lead would remain in double-digits the rest of the game and the Falcons eventually pushed it to as many as 18 points after Welch and freshman Alex Strickland combined to make four-consecutive 3-pointers.

Junior Davia Harris chipped in 11 points on 5-of-8 shooting from the field.

The Falcons shot 47.3 percent from the field while holding the Saints to just 37 percent shooting. Montevallo also forced 34 Flagler turnovers and converted them into 32 points.

A Flagler jumper with 11:39 left in the game brought the Saints back to within four points at 38-34, but the Falcons closed the game on a 14-5 run over the final 5:25 to seal the victory.

Montevallo men down the Saints

The Falcons (9-4 overall, 3-2 in Peach Belt Conference) were led by junior DeMarcus Catchings, who recorded a double-double with 17 points and 12 rebounds.

The Falcons shot just 35 percent from the field but used 20 offensive rebounds to keep the lead. Montevallo also forced 19 turnovers, which allowed the Falcons to hold a 24-12 advantage in points off turnovers.

The Montevallo defense held the Saints to 18 first-half points — the lowest point total in a half by the Saints in more than four years.

The Falcons raced out to a 20-8 lead and never looked back. Montevallo held a 29-18 lead at the break after leading by as many as 17 points points in the opening half.

Trailing 44-28, Flagler chipped away and was able to cut the margin to single digits after a layup with 8:55 to play capped an 8-0 run. Davis scored on a transition layup to give the Falcons a 48-36 lead with 7:13 left in the game.

The Saints made a late run, capped by a pair of free throws, with 28 seconds left to cut the deficit to 53-50. However, Montevallo nailed all six of its free-throw attempts to put the game out of reach.

An Armstrong Atlantic State University 3-pointer with one second remaining in overtime downed the Falcons 67-66 in a Peach Belt Conference game Jan. 17.

The Falcons had hit a 3-pointer four seconds earlier to go up by one point, but a quick inbound pass and dribble up the floor allowed the Pirates to get an open look. Chris Edwards knocked down the 3-pointer with 0.9 seconds left on the clock.

Montevallo was led by Severtsgaard, who had 16 points and eight rebounds. Catchings added 13 points and seven rebounds. Brown and Ryan Westbrooks added 10 points each.

With Montevallo presumably holding for the final shot, Westbrooks drained a 3-pointer with 5.5 seconds left to put the Falcons up 66-64. However, Edwards 3-point basket handed the Falcons their second conference defeat.

Montevallo jumped out to a 16-4 lead in the first nine minutes of the contest – including seven points from Severtsgaard, who also canned a 3-pointer on his first attempt of the season from beyond the arc. The Pirates cut the lead to seven on a Grant Domsic 3-pointer to give the Falcons a 28-21 halftime lead.

A Jesse Wheeler field goal on the first possession of the second half cut the Falcons’ lead to five, but Montevallo held the Pirates scoreless for the next 8:05 and stretched the lead to 14 points at 41-27 with 11:26 remaining.

The Pirates went on a 31-12 run to take a 58-53 lead with 2:09 remaining in regulation. A jumper by Severtsgaard with 1:31 left cut the Pirates lead to just three points.

Brown tied the game with just more than 35 seconds to play in regulation as he drained a 3-pointer from the right side on an assist by Westbrooks.

The Pirates had two lay-up attempts in the final 30 seconds but were unable to score to send the game to overtime.