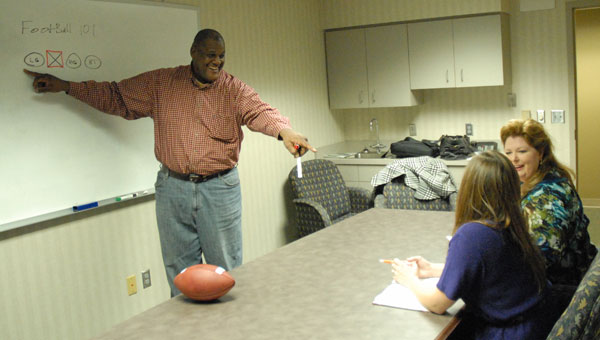 On Jan. 28, former University of Alabama football standout Thomas Rayam will begin his class by explaining what a football is. When his students complete the lesson, they will have detailed knowledge about stacking the box, running hot routes and other advanced football techniques.

“The first thing I tell the class is ‘this is a football,’” said Rayam, who is most famous for blocking a Penn State field goal during the 1989 meeting between the two schools, securing the victory for the Crimson Tide.

“In the second hour of the class, we explain plays in detail, and why the players do what they do during the plays,” Rayam added. “It’s not just touchdown or a quarterback sack. Something happens before that.”

Rayam, whose wife, Elaine, is a Thompson High School alumni, will hold his Football 101 class from 5-9 p.m. on Jan. 28 in Physician’s Center rooms B and C at the Shelby Baptist Medical Center in Alabaster.

The class is free, but donations will be accepted to benefit the Team Rayam non-profit organization.

During the class, Rayam will cover everything from football basics to advanced play breakdowns and players’ individual roles in a game.

The class, which is open to both men and women, will also feature exercise, stretching and nutritional tips, a deep tissue massage drawing, door prizes and snacks.

Rayam, who played in the NFL and Canadian Football League after playing at Alabama, said the class will not only focus on the physical aspect of the game, but also the mental.

“It’s not just a physical game. It’s mostly mental,” Rayam said. “If you’ve ever played football or coached football, you know the game is 90 percent mental and 10 percent physical.”

Rayam began holding the Football 101 classes in Canada while he was living there and playing for the CFL’s Edmonton Eskimos. Since his first class, Rayam has taught thousands of women and men more about one of America’s most popular sports.

Shelby Baptist Director of Occupational Medicine Dana Blake, whose husband volunteers with the Briarwood Christian School football team, said the class will help those who know little about football to prepare for the upcoming Super Bowl.

“Sometimes I will be sitting on the sidelines, and I have a hard time even keeping up with where the ball is,” Blake said with a laugh. “I am actually really looking forward to this class. I can’t wait to learn this stuff.

“And Thomas is an expert. There’s nothing like learning from an expert,” Blake added.

During the class, Rayam tries to give parents of young football players a realistic view of football and the dangers it presents.

“You’ve got kids that want to play football, but nobody in their family has ever played, and their parents have a lot of questions,” Rayam said. “This sport is dangerous. If you take it the wrong way, you can get hurt.

“I focus on teaching the kids to protect themselves first,” said Rayam, who regularly holds football clinics for local kids through Team Rayam.

To RSVP to the event, call Blake at 620-8813 or e-mail dana.blake@bhsala.com. For more information on Rayam, visit Thomasrayam.com.