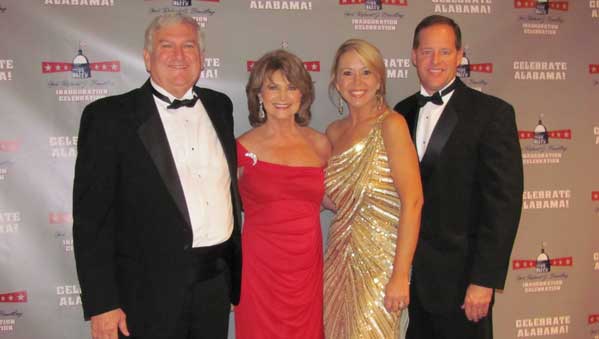 State Rep. Mike Hill, R-Columbiana, and his wife Carol along with state senator Cam Ward, R-Alabaster, and his wife Julie at the Inaugural Ball in Montgomery.

Stylish ball gowns and sophisticated tuxedos were the attire of the evening for several Shelby County residents who attended the governor’s Inaugural Ball in Montgomery Jan. 17.

As the sun set on inauguration day, guests dressed in their finest arrived at the Renaissance Hotel to celebrate the newly-instated state officials, including Columbiana native Robert Bentley as the state’s 53rd governor.

The ball was from 7-10 p.m. in the convention center ballroom. Hill said the evening included a live band, dancing, introduction of the governor and first lady and a performance by the Montgomery Ballet.

“The ballet performed right there on the dance floor. It was a modern piece with the girls in beautiful period dresses and the boys in tuxes,” Hill said. “It was just beautiful.”

A buffet of local food was available to guests, with dishes representing the four regions of the state: mountain, metropolitan, region and gulf.
Hill said a long banquet table was decorated gorgeously at the front of the ballroom for Bentley and his immediate family, including his four young granddaughters.

“One of my favorite parts was when little friends of his granddaughters would run up to the table and give them hugs,” Hill said. “It was the cutest thing ever.”

Shortly after the grand entrance of the governor and first lady, the couple began the first dance, opening the dance floor for the nearly 4,000 guests, Hill said. The Lamb Family, a violin ensemble from Tuscaloosa, provided entertainment for the evening while Bentley and his wife mingled with their guests.

Portrait stations were also set up for guests to have their pictures taken by professional photographers.

“It was just fun to see everyone dressed up, and everyone was excited about the new governor and what he stands for,” Hill said.

Along with elected officials from Shelby County, many of Bentley’s extended family members from Columbiana attended the ball.

Bentley’s cousin and Shelby County Commissioner Corley Ellis attended with his entire immediate family, including nieces and nephews, he said.

“We know Robert and what he stands for. We wanted to go support him not only because he’s a family member but also because he’s a friend,” Ellis said. “He’s an honorable, trustworthy guy. We just think that much of him. We just had to be there.”

Hill said of the six inaugural balls she’s attended, Bentley’s was her favorite.

“It was the most fun to me because it was exciting to have a governor from our county, who grew up in Columbiana,” she said. “He’s someone we all know so well.”