Eagles down Pelham in area victory 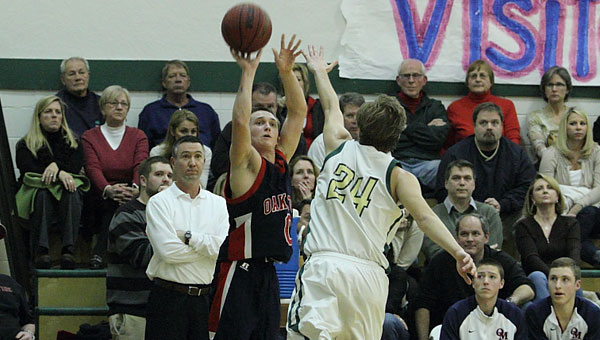 Oak Mountain High School forward Colton McGriff connected on a 3-pointer with 3.4 seconds left to lift the visiting Eagles to a 39-36 victory over Pelham in a Class 6A, Area 10 contest Jan. 21.

McGriff’s game-winning 3-pointer was his only field goal of the game.

The tight contest was a sharp contrast from the first matchup between the two teams when Oak Mountain defeated Panthers by a 62-32 margin.

Pelham (8-12 overall, 0-4 in Class 6A, Area 10) held a narrow lead for most of the fourth quarter after outscoring the Eagles 15-4 in the third period and erasing a 22-12 Oak Mountain halftime lead.

Bert Seitz finished with eight points. Garrett Cosgrove was held to only six points as he hit just 2-of-11 field goals and played much of the game in foul trouble.

The Eagles built their 10-point lead at intermission on the strength of a strong second quarter. After trailing 9-8 after one period, Oak Mountain overtook the Panthers with a 14-3 advantage in the second stanza.

Bert Seitz scored eight points in the opening half for the Eagles, with most of the points coming after offensive rebounds. Seitz finished with a game-high 11 rebounds, including nine on the offensive end.

Oak Mountain’s offensive rebounds proved to be the Panthers’ biggest problem in the game as the Eagles pulled down 18 rebounds on the offensive glass and 32 boards overall. Pelham finished with 22 rebounds.

With its dominance on the offensive boards, Oak Mountain attempted 22 more field goals than Pelham. The Eagles finished with 15-of-48 field goals (31.3 percent), while the Panthers hit 13-of-26 attempts from the floor.

Rebels move closer to area championship with win over Chargers