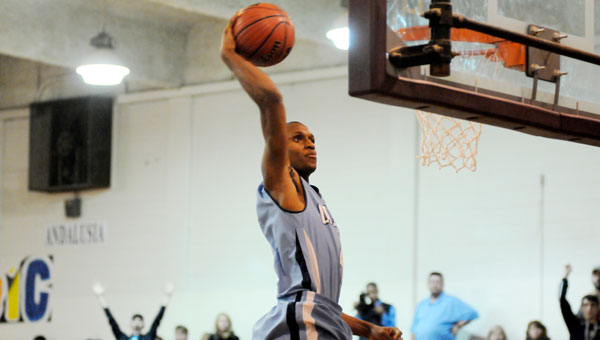 By ANDREW GARNER / For the Reporter

ANDALUSIA — The Andalusia High School boys’ basketball team got off to a good start and held on late in the contest to knock off Calera 93-85 in high school basketball action Jan. 22.

The Bulldogs jumped out to a 32-16 lead following the opening quarter, which put Calera in a dangerous spot on the road against one of the top teams in Class 4A.

“There were a lot of things you could point to, but I think the biggest thing was giving up 32 (points) in the first quarter,” said Calera coach Robert Burdette. “When you dig yourself a hole like that, it’s hard to get out of it.”

Jeremy Hyde and Titus Adams added 18 points each in the defeat.

Despite the early deficit, the Eagles battled back to tie the game in the fourth quarter and had all the momentum leaning their way before a pair of technical fouls took away hope for a win.

Hyde and Burdette were given the fouls one after the other late in the game, which turned momentum in favor of Andalusia.

After the Bulldogs took a commanding lead after the first quarter, Calera outscored Andalusia 17-9 in the second quarter and trailed 41-33 at halftime.

Haynes kept the Eagles within reach of the lead with key slam dunks throughout the second half. Calera took a 52-51 lead on a steal and layup by Haynes in the third quarter.

Hyde nailed a 3-pointer and was fouled on the perimeter shot late in the third quarter before converting the free throw for a four-point play, which tied the game at 57-57 heading into the fourth quarter.

The game was tied 63-63 early in the fourth quarter before Andalusia’s defensive pressure got to the Eagles, which forced Calera turnovers that were converted into easy buckets on the other end.

Andalusia coach Richard Robertson expected Calera to battle back after the Eagles struggled in the opening quarter.

“I knew they were coming back,” Robertson said. “They got one (Haynes) we don’t have an answer for. He’s a Division I basketball player, and I knew that. A lot of people are going to be out, and he knows the game.”

Burdette was disappointed the Eagles couldn’t come away with a road victory at Andalusia after battling back to tie the game in the second half.

“We got out of it, and had opportunities,” Burdette said. “They made some plays and we didn’t make some plays.”