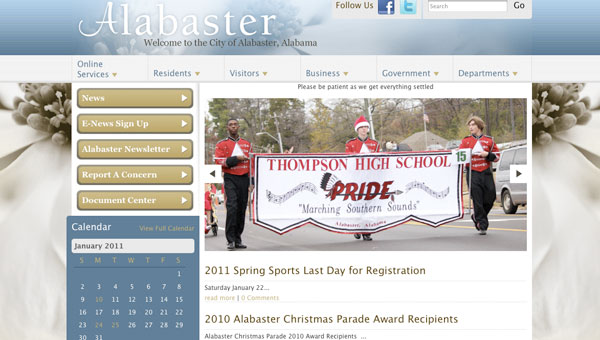 The city of Alabaster recently launched its new city website at Cityofalabaster.com. The new site includes several additions, such as a consolidated calendar and online registration forms. (Contributed)

Visitors to Alabaster’s city website likely will have an easier time locating information, contacting city officials and registering for Parks and Recreation programs, according to City Administrator George Henry.

The city launched its new website at Cityofalabaster.com on Jan. 21 in an attempt to “clean up” what Henry said was an overly complicated site design.

“The new site has been a long time in the works,” Henry said Jan. 24 as he worked to finalize the new site. “This is something that is near and dear to my heart. I want to increase efficiency.

“I want to make it easier for people to do business and interact with the city,” he added.

One of the major changes to the site is the calendar of events, which displays schedules from all city departments. On the old website, each department displayed a separate calendar on its section of the site.

“It seemed like there were 300 different pages on the old site,” Henry said. “If you were looking for a calendar, you had to poke around and just hope you found it.”

The new calendar is on the left side of the new site. Clicking the “View Full Calendar” link on the top of the calendar brings up the current month, and contains information for every city event.

“I hope (consolidating the calendars) encourages more people to show up to city events,” Henry said, noting he frequently updates the calendar from his iPad.

The city also added online registration and payment forms for events such as the Parks and Recreation Department’s Start Smart soccer program. With the forms, residents will be able to register and pay for events and programs without stopping by City Hall or the Parks and Rec building.

“Most people are like me. I can’t always get somewhere like that between 8 and 4:30. Having these forms available is a big improvement,” Henry said.

The city is also working to post documents such as City Council minutes and other public records to the site’s “Document Center” tab.

“We are going to try to post anything we can within the code of Alabama,” Henry said, noting the site also allows users to view the current month’s city newsletter instantly.

“If you need a document, whether it’s building, revenue, safety, we are trying to make it more intuitive,” Henry added.

Although Henry and other city employees are still in the process of posting and formatting items, most information on the site is already available, he said.

“It’s going to really improve efficiency and add conveniences to the citizens of Alabaster,” Martin said. “There is a lot of information on there not only for those who live and work in Alabaster, but also for those who are visiting Alabaster.”

“It’s been in the works for a long time, and I think it will be a good thing for the citizens of Alabaster,” Frings said.

Hispanic business owners on the rise