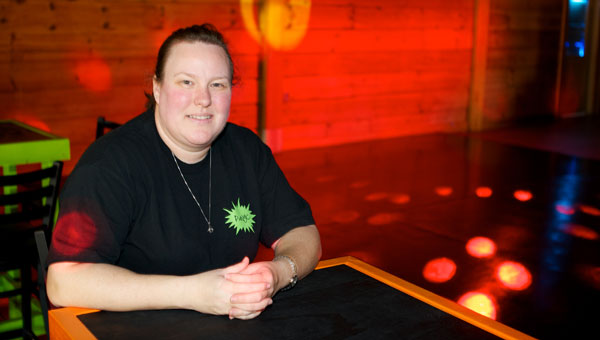 On Friday and Saturday nights in a building off Alabama 119 in Alabaster, hundreds of teens can be found laughing, mingling and dancing to a mixture of techno, rock and hip-hop music while a flurry of lights illuminate the dark walls.

A similar scene can be found in house parties and bars across the country, but Alabaster’s venue is different. All the patrons on weekend nights are between the ages of 15 and 19, and there is no alcohol, tobacco or drugs to be found.

While bars and clubs across the Birmingham metropolitan area are packing in adults every Friday and Saturday night looking to relax and escape the previous week’s stress, Alabaster’s Panyc is seeking to do the same for a younger demographic.

“On Friday and Saturday nights, we usually have between 100 and 200 teens in here,” said Panyc owner Laura Krubinski. “It’s always a good size crowd.”

Krubinski decided to open Panyc at 251 Buck Creek Road in December 2010 after hearing a common teenage complaint from her 16-year-old daughter.

“We have a daughter who is 16 years old, and it was hard for her to find things to do around here,” Krubinski said. “There was really nothing for them to do other than going to a movie and maybe walking around Walmart.

“There are places like Aqua in Birmingham that are 18 and up, but we wanted to emphasize the high school crowd,” she added.

During teen nights, which are held from 7:30 p.m.-midnight every Friday and Saturday night, teens between 15-19 years old can enjoy non-alcoholic specialty drinks in a smoke-free environment for $10 a night or $15 for a weekend pass.

The club enforces a strict dress code on teen nights, which does not allow “excessively short shorts or short skirts,” bandanas, du rags, hats or hoodies. The club also does not allow exposed undergarments of any kind or anything gang-related.

“It’s just a way of providing a way for teens to hang out in a little more adult-supervised environment than just hanging out in a parking lot,” Krubinski said. “But for the kids, it’s not like having your parents right there.”

In addition to the pair of teen nights each week, Panyc also serves breakfast seven days a week, lunch Monday through Friday and a 21-and-older country night on Wednesdays.

The club has already hosted several teen birthday parties, and is planning to add a 21-and-older rock night on Thursday nights, Krubinski said.

“We started with the teen stuff, and are adding more as we go,” Krubinski said. “We have had a real good response so far.”