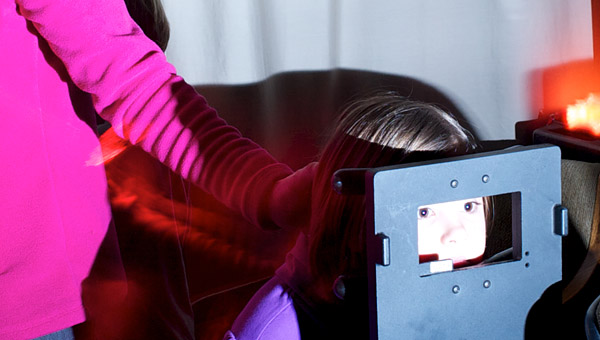 Inverness Elementary school second grader Grace Anne Greene has an image made of her eyes during a screening at the Elementary School on Jan. 25. (Reporter Photo/Jon Goering)

NORTH SHELBY – Students at Inverness Elementary School were antsy as they stood waiting for their eye scans, exams that could greatly affect their futures.

“With eye problems, the earlier you find them, the easier it is to correct,” Kennemer said. “If I could corral all of the 3-year-olds in the state and run eye scans on them, it’d be better in the long run.”

Although Kennemer and his team don’t have the opportunity currently to run eye scans on children so young, kindergarteners, second-graders and a portion of fourth-graders in Alabama’s public schools are benefiting from the exams. 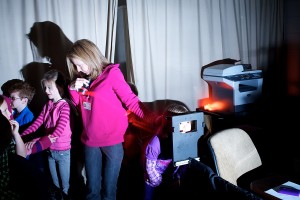 Inverness Elementary school second grader Grace Anne Greene has an image made of her eyes while school volunteer Beth Allen and some of her classmates look away from the eye scanner's flash during a screening at the Elementary School on Jan. 25. (Reporter Photo/Jon Goering)

The screening tool, the OSS-C Ocular Screening System, works as a camera, taking a photorefractive picture of a child’s eyes in order to uncover eye problems such as nearsightedness, farsightedness, cataracts and focus issues, as well as more serious issues.

“The exams require no eye drops, nothing invasive,” Kennemer explained.

Children who have trouble seeing well in the classroom are more likely to get behind. Eye problems are directly linked to childhood delinquency and dropout rates, Kennemer said.

Kennemer explained that since the exam requires no response from the children, he would prefer to begin with neonatal screenings, examining infants’ eyes in order to discover cataracts and glaucoma cases early enough to prevent permanent damage.

“I just wanted to see it live and in person,” she said. “It’s been funded by the Department of Education since I’ve been with them.”

Unlike the old-fashioned Snellen eye charts, the Alabama Eye Screening Program uses technology that relies on specialized images rather than a child’s response to the eye chart or the ability for the child to speak English.

“At this school, there are about 11 different languages,” McClurkin said.

“You can’t cheat on our tests,” said Charlotte Hill, Vision Research’s manager of field operations. “You can’t memorize any kind of chart.”

After the program screens a child for eye problems, the parents receive a report of the test along with a photograph of their child’s screening along with an explanation of the results and recommendations for further tests. The program refers children with vision problems to Sight Savers America, located in Pelham, for any follow-up appointments.