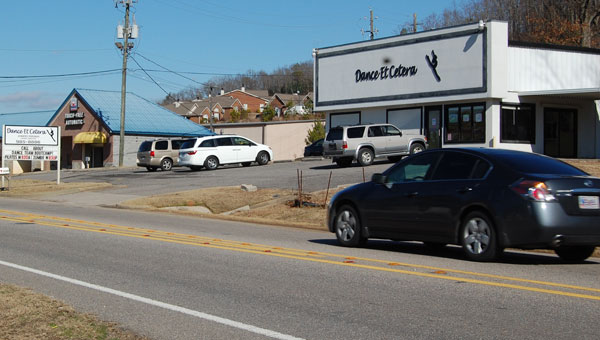 ALDOT is completing design work on a project to add more lanes to Alabama 261, which is frequently congested during rush hour travel. The project is set to begin in 2014. (Reporter Photo/Neal Wagner)

A project to widen Alabama 261 to five lanes from Bearden Road to U.S. 31 could begin within the next three to four years, according to the Alabama Department of Transportation.

ALDOT recently purchased about 10 properties along Alabama 261, including Dance Et Cetera and a building at 2995 Valleydale Terrace, and will begin demolishing some structures to make way for the widening project within the next few months, said Brian Davis, division engineer for ALDOT’s Third Division in Birmingham.

“I’d say (demolishing the structures) should begin in the next couple of months,” Davis said.

After the structures are demolished, ALDOT will continue to design the project and will hold public meetings before breaking ground on the new lanes likely sometime in 2014.

“There will be some more public hearings before we break ground on the project,” Davis said. “Construction is still quite a few years down the road.”

Discussion of the widening project began in 2002, when ALDOT held a public meeting to discuss the project’s options.

Although the original project included also widening Alabama 261 from Bearden Road through Helena to Shelby County 52, historic structures along the road in Old Town Helena caused ALDOT to only include additional lanes from Bearden Road to U.S. 31.

In 2004, the agency decided on a project option designed to minimize the impact on properties surrounding the road, Davis said.

ALDOT then held a meeting the next year detailing how widening the road would affect neighboring properties, and outlined which properties it would have to purchase to complete the project.

After the 2005 meeting, the state was ready to begin work on adding the additional lanes, but an unexpected incident in Mobile changed the agency’s plans.

In 2007, runoff from an ALDOT construction project on U.S. 98 in Mobile County caused red mud and silt to pour into Mobile’s drinking water supply. The incident caused ALDOT to place all of its projects on hold.

“That really caused us to step back and take a look at how we do things,” Davis said.

Because mountains and hills surround Alabama 261, widening it would require installing many erosion-control devices, such as retaining walls, to ensure the Mobile incident did not repeat itself, Davis said.

“If you’ve ever been on that road, you know there are several steep cliffs and areas that could erode easily,” Davis said. “That area has given us a lot of erosion problems.”

Currently, ALDOT is in the process of redesigning the Alabama 261 project to reflect the erosion-control changes.

Once the design work is completed, the agency will hold another public meeting to go over the changes it has made to the project. After the meeting, ALDOT will seek approval from the Federal Highway Administration before it breaks ground on the new lanes.

“The economic situation we have right now caused us to look at the money we have on the table and prioritize our projects,” he said, noting the project will be funded by a mix of state and federal funds. “That caused this project to get pushed back a little bit.”