Mt. Laurel first grader Austin Brock watches as a schoolmate tries to pick up a penny with the robot on Jan. 25. (Reporter Photo/Jon Goering)

MT LAUREL – The wiggling mob of first-graders stilled in wonder as “da Vinci,” a surgical robot, delicately picked up a penny with precision formerly unavailable to surgeons.

“It’s an incredible hands-on experience. We’re constantly striving to be a 21st-century school, and it’s great for the children to see technology integrated into medicine this way,” Walker said. “Every child is going to get their hands on that machine today. It’s just amazing.”

Alabama State Representative April Weaver, R-Alabaster, wears a second hat as Shelby Baptist Medical Center’s director of business development and marketing. She explained that while Shelby Baptist had a surgical robot for many years, the medical center purchased a new da Vinci robot in order to expand procedures surgeons could perform robotically. 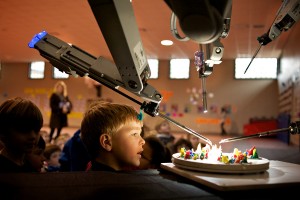 Mt. Laurel first grader Austin Brock watches as a schoolmate tries to pick up a penny with the robot on Jan. 25. (Reporter Photo/Jon Goering)

“A surgeon sits at the operating station, and we’re able to do procedures with the robot,” Weaver said.” “We had a da Vinci robot, but now there’s a new robot in town.”

Primarily, Shelby Baptist surgeons use the robot for cardiothoracic and prostate surgeries and hysterectomies, but they are exploring other surgeries as the robotics program expands, Weaver said.

Bryan Wilks, a da Vinci sales representative for Intuitive Surgical and father of a Mt Laurel kindergartener and second-grader, recruited his sixth-grade daughter to help the elementary-age children put their small hands into the controls and experience the precision of the robot.

“da Vinci is a tool that surgeons use to help patients feel better,” Wilks told the enthralled first-graders. “What do you think of da Vinci?”

“Awesome!” the first-graders shouted in unison.

Wilks explained to the children that with a robot like the da Vinci robot, the surgeon doesn’t have to be in the same room or even the same country as the patient.

“(The children are) the future; they know what robots are,” Wilks said. “We’re showing the community that there are options in surgery. Patients don’t always know about the options.”

Inverness Elementary school second grader Grace Anne Greene has an image made of her eyes during a screening at the... read more