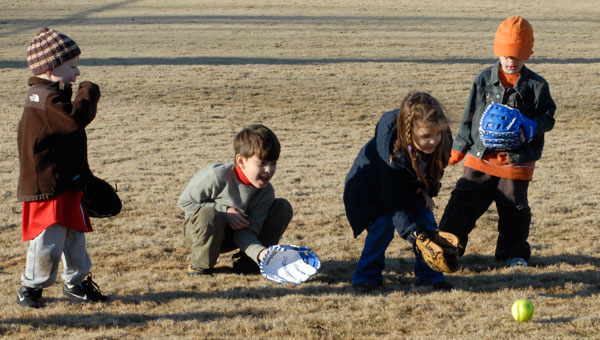 Children participate in an Opportunity League game at Fungo Holler Park in Pelham in March 2010. The league for special-needs children is returning for a second season this year. (File)

When Easter Seals Director of Marketing and Development Kelli Keith saw an Opportunity League player toss out the first pitch on the league’s opening day in 2010, it hit her.

After months of planning, organizing and hard work, Keith was able to witness the tangible results of her efforts.

“I’ll be honest, I cried that day. I actually cried several games last year,” Keith said. “I love my job, but that day I felt like I had reached my mission. I had helped to change someone’s life.”

Last year marked the first time special-needs children had been able to play baseball in Pelham in a league designed especially for them. After 32 children and more than 50 volunteers signed up to participate in the league’s inaugural year, Easter Seals decided to make the program a yearly occurrence.

“I feel so passionate about it. To know that I helped give (the kids) that opportunity is the best feeling in the world,” Keith said. “To see them happy truly made me happy.”

Through the league, special-needs children play in hour-long games on Saturday mornings at Pelham’s Fungo Hollar Park. During the games, all players are accompanied by a “buddy” who helps them with hitting, running and fielding.

Easter Seals does not keep score during the games, which allows the children to enjoy the sport in a stress-free environment, Keith said.

“It’s really amazing to see the look on the kids’ eyes when they hit the ball. They get so excited,” Keith added. “It really gives them a sense of pride to put their jersey and cleats on and go out there and play.”

Many of the children who participate in the league have siblings without disabilities who have been involved in sports for years, Keith said.

“A lot of the kids have a typical brother or sister who has been playing baseball for years,” Keith said. “Some of these kids have been going to see their brothers and sisters play for a long time, and they want to play too.

“To have their brothers and sisters come out here to see them play, it just really means a lot to these kids,” she added. “It’s like the paparazzi at every game. All the parents will come out with cameras, and everyone is always cheering.”

The final registration day for the event will be Jan. 29 from 9-11 a.m. at the Pelham Parks and Recreation office off U.S. 31 on Ballpark Road. However, Keith said she will work with anyone unable to make it to the park office by Jan. 29.

Registration fees for the league are $75 per player, but Easter Seals will not turn away any child based on their inability to pay.

Practice for this year’s Opportunity League will begin on March 7, and opening day will be April 9. To register or volunteer for the league, visit eastersealsbham.org or call Keith at 314-2187.

After the baseball season is completed, Easter Seals will begin planning Opportunity Leagues for other sports, such as cheerleading, golf and tennis.

“Our goal is to get through this year and then look at adding other sports,” Keith said. “We aren’t just stopping with baseball.”