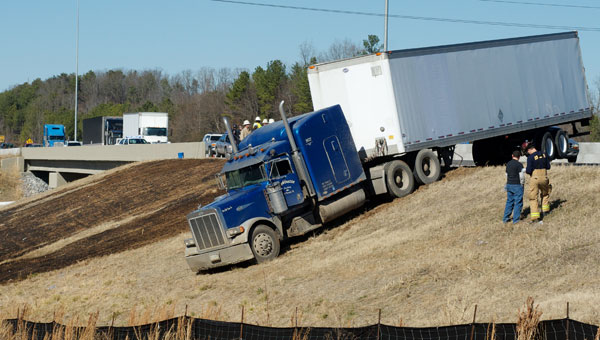 A firefighter from the Pelham Fire Department talks with the driver of the semi that took down power lines after losing control of his semi on I-65 in Pelham. The downed power lines stared a grass fire and also took out a number of traffic lights in the area. (Reporter Photo/Jon Goering)

Police reported no injuries after a semi truck veered off Interstate 65 near the Cahaba Valley Road exit in Pelham Jan. 28.

The wreck happened at 1:27 p.m., when the truck left the road and struck a telephone pole, said Pelham Police Lt. Davy Lott. 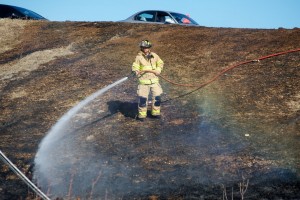 A firefighter from the Pelham Fire Department sprays the area where a grass fire started beside I-65 in Pelham. (Reporter Photo/Jon Goering)

The collision caused the power lines to start a small grass fire. The Pelham Fire Department contained the fire, before it caused major damage. The wreck also caused the surrounding traffic lights to lose power, and caused authorities to shut down north- and southbound lanes near the Cahaba Valley Road exit.

As of 3:10 p.m., Alabama State Troopers had reopened the interstate.