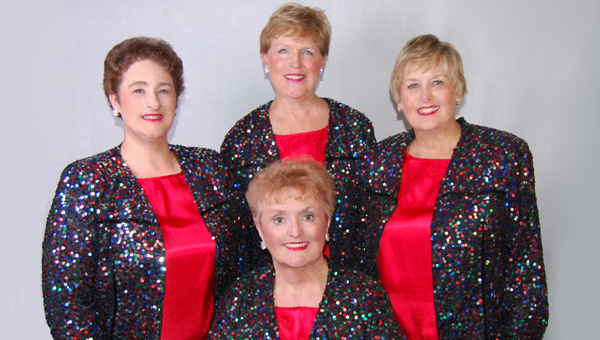 The Surprise Package Quartet is offering a unique gift for Valentine’s Day.

The group, which includes Wilsonville’s Judy Freeman, is taking bookings for singing Valentines to be delivered Feb. 13-14.

“We have a lot of fun going around singing for people,” Freeman said.

For $30, you can pick two songs from a list of 12. Along with a card, the group will show up and sing those songs to your special someone. For an extra $5, they’ll deliver a rose or small stuffed animal.

Freeman said the reaction depends on the sex of the person they’re singing to.

“The women are sentimental,” Freeman said. “They get a little emotional that somebody would do that for them. I guess the words of the songs get to women more than they get to men. A lot of the men get embarrassed and turn red. Women think it’s so sweet, and men probably wish they were someplace else.”

The quartet started 18 years ago with four members of Birmingham’s Harmony Hills Chorus, which is part of the Sweet Adelines.

Surprise Package sings four-part barbershop harmony. Freeman, who is about to turn 70, has sung for most of her life. She sings bass with the quartet.

The other members are Centreville’s Pam Cottingham, who sings baritone, Trussville’s Beth Buchholz, who sings tenor, and Cropwell’s Janet Muller, who sings lead.

To prepare, the quarter practices once a week at First United Security Bank in Calera, Freeman said.

After booking the surprise performances, the quarter sits down and maps out their routes.

Sometimes, co-workers of somebody’s special someone will know the quartet is coming to sing. When the quarter arrives, everybody gathers around to hear.

Cottingham said the quartet has caused some women to break down in tears.

Once, Cottingham said, the quarter showed up to sing for a man working at a garage.

“He was pretty embarrassed and his co-workers were amused,” Cottingham said.

The singing isn’t just for sweethearts. Cottingham said they’ve performed for a lot of mothers at the request of their children.

The song list includes: “Can you Feel the Love Tonight”, “I Don’t Know Why I Love You Like I do”, “Stars fell on Alabama”, “When I Fall in Love”, “Somewhere Over the Rainbow”, “Somewhere Out There”, “When I’m 64”, “Undecided”, “Sentimental Journey”, “You Gotta See Mama Every Night”, “We Go Together” and “Mr. Sandman.”

Grady Duffey and Gene Duffey pose in front of a Baby Toomer's Corner Oak Tree in the yard of Gene's... read more