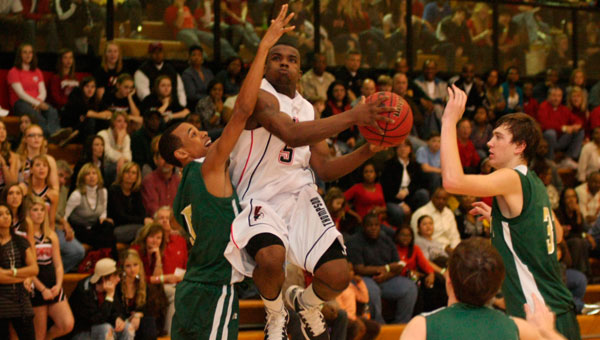 Thompson High School guard Demarcus Threatt splits two Pelham defenders on a drive to the basket in the Warriors' 64-57 win over rival Pelham in a Class 6A, Area 10 contest Jan. 28. (Contributed/Eric Starling)

One season after finishing dead last in area standings, the Warriors went from worst to first following a 64-57 win over rival Pelham to capture the Alabama High School Athletic Association Class 6A, Area 10 crown Jan. 28.

The Warriors, who won three consecutive area championships before a dropoff last season, earned the right to host the Class 6A, Area 10 tournament next month. Thompson, which finished with a 1-7 record in area play last season, finished the regular season area schedule with a 5-1 mark.

“The few (players) that we had  on that team really learned from it,” Davis said.

Thompson senior Ryan Spence shined on senior night, as he drained six 3-point baskets and finished with a game-high 21 points.

Demarcus Threatt, who had six points entering the fourth quarter, hit 6-of-7 free throws down the stretch to clinch the victory and finished with 15 points on 4-of-6 shooting from the floor. Ryan Coleman chipped in 14 points and dished out a team-high seven assists.

Thompson raced out to a 15-8 lead at the end of the opening quarter following a 3-pointer by Spence with 4.7 seconds remaining in the first period.

The Warriors extended their lead to as many as 12 points in the second quarter at 26-14 following a baseline runner by Threatt, which capped an 8-0 run by Thompson, with 3:25 remaining in the first half. Pelham cut the lead to three points following a 3-pointer by Tony Williams, which capped a 10-1 run by the Panthers, with 25.9 seconds remaining in the second quarter.

Nabors grabbed an offensive rebound and scored on a putback with 1.5 seconds left in the opening half to give the Warriors a 29-24 advantage heading into the locker room at halftime.

The Panthers took their first lead since the game’s opening minutes following a layup by Rice with 4:16 left in the third quarter. Rice’s layup capped a 10-3 run to start the second half by Pelham and gave the Panthers a 34-32 lead.

The Panthers’ lead grew to as many as four points before Spence hit two 3-pointers late in the third period to help Thompson regain the lead. Spence, who hit three 3-pointers during the third quarter, gave the Warriors a 42-39 lead following a 3-pointer with 1:09 remaining in the quarter. Douglas scored a basket with 14 seconds remaining to cut the Warriors’ lead to 42-41 heading into the fourth quarter.

Qadash Williams gave the Panthers their final lead at 43-42 following his layup to open the fourth quarter. Threatt quickly raced down the floor for a layup to put the Warriors ahead 44-43. Threatt’s pull-up 3-pointer with 1:47 remaining gave Thompson its biggest lead in the second half at 57-46.

Rash drained a 3-pointer with one minute remaining in the contest, but the Panthers couldn’t make it a one-possession game.

Despite owning two regular season wins over the Panthers, Davis said Pelham remains a dangerous team. The Warriors will face the Panthers, who shot 53 percent from the floor and 56 percent from beyond the arc, in a rematch in the Class 6A, Area 10 tournament semifinals.

“We’ve got two regular season games left,” Davis said, “but every single thing we do will be focused on winning that game.”

Pelham coach Joel Floyd said his squad will look back to last season for motivation. The Panthers defeated Thompson in two regular season meetings before falling to the Warriors in their area tournament opener.

“Pelham-Thompson is always going to be a battle,” Floyd said. “It’s hard to win three games (in a row) against each other. We saw that last year.”