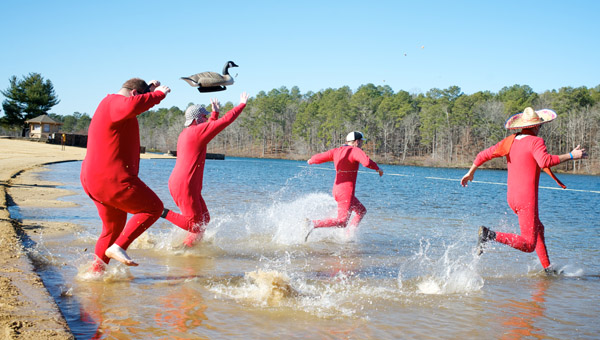 Outdoor temperatures in the low 60s didn’t keep participants in Saturday’s Polar Plunge at Oak Mountain State Park from turning shades of purple and red after taking a dip at the park’s beach.

Dozens of participants representing more than 10 teams sprinted down the beach and into the frigid water to raise money for Special Olympics Alabama.

Many of the plunge participants said the moderate outdoor temperatures were misleading, and the water provided an unexpected shock.

“It felt like 1,000 knives cutting into you,” Shelby County 911 dispatcher Jordan Fletcher, who was outfitted in a red wetsuit and a houndstooth toboggan, said with a laugh shortly after leaving the water. “But we couldn’t imagine a better cause.”

The event, which was organized by the Alabama Law Enforcement Torch Run, raised more than $8,000 for the Special Olympics, and provided a morning of entertainment for those who gathered on the beach to watch the plungers. 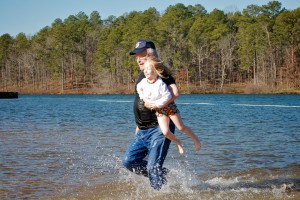 Some participants were dressed like superheroes, some carried along large rubber ducks and some entered the water wearing little more than a pair of shorts.

Members of the Hoover Police Department decided to take the plunge wearing their on-duty uniforms.

“We actually talked about it, and decided to just wear our duty uniforms,” Hoover Police Sgt. Mike Wright said shortly after he and four of his fellow officers exited the lake. “The water really wasn’t that bad.

“These other guys are actually on our dive team. I just tagged along with them,” Wright added.

Philip Morris, a Shelby County 911 dispatcher who was outfitted in a red wetsuit and a cape, said he and his co-workers decided to participate in the event in the wee hours of the morning.

“They say nothing good ever happens after 2 a.m. Well, we all decided we were going to do this after 2 a.m.,” Morris said with a laugh.

“The water wasn’t that bad. For the first 10 seconds you really can’t feel anything. After that, it starts getting kind of cold,” Murphy said after taking the plunge. “I’ve been in water a lot colder than this before. Of course, I was a lot younger back then.

“Once I got in, I swam around a little bit, so that helped a little,” Murphy added.