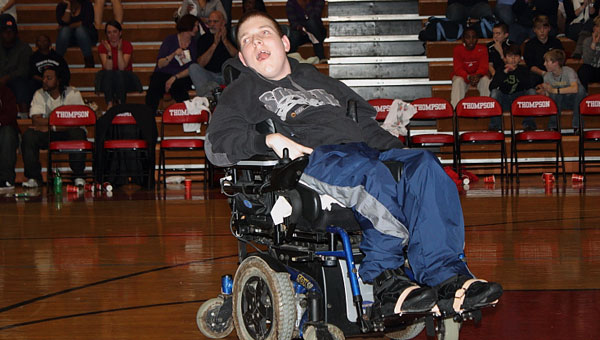 A group of volunteers are working to build a new house for Thompson High School senior Josh Carden after his grandfather was killed in a traffic accident. (File)

Littleton, who traveled to Carden’s house with a few other volunteers several weeks ago to determine which repairs needed to be made to the residence, realized there were only two paths the group could take to help the THS student and his grandmother.

“We realized that we would basically have to do nothing or build a whole new house,” Littleton said. “Me and a couple of guys went over there and met Josh shortly after the tragedy, and we realized that house is not fit for him.

“They had tried to do a few improvements to the house over the years, but they were not up to code. We couldn’t do anything with them,” Littleton added. “It doesn’t have the correct bathrooms for Josh, and it’s hard for him to get around.”

On Dec. 6, Carden’s 73-year-old grandfather, Tommy Pickett, died after he was struck by a vehicle while crossing the road in front of his house to help Carden cross the street.

After hearing about the family’s tragedy, Littleton and other volunteers began thinking of ways they could help Carden cope with the loss of his primary caregiver.

“His grandfather took care of him,” Littleton said of Carden, who has cerebral palsy and uses an electric wheelchair for mobility.

“Anything we can do to simplify his life would be the best,” Littleton added.

When the volunteers realized they would not be able to repair Carden’s current house, they began looking into what it would take to construct a new one more suited to Carden’s needs.

Because Carden and his grandmother, Louise Pickett, currently live in a noisy, high-traffic area of Alabaster, one of the Josh Carden Project’s first goals was to locate different land on which to build the new house.

After searching for a few weeks, the volunteers were able to complete a land swap for property on Washington Lane off Butler Road.

“The (family’s current) lot is now zoned commercial, so nobody will ever live there again,” Littleton said. “We are in the process of getting the property (off Washington Lane) surveyed now so we can split it up.”

Once the survey is complete, project volunteers will bring the land split proposal to the Alabaster Zoning Board for approval.

If the city approves the land split in February, the group could begin building the house “before spring,” Littleton said.

“Getting the land split up is really the last hurdle. As soon as we get that done, it should move pretty fast,” he said. “I would love to be building it before spring.”

The group has already received material donations from several companies, and Donovan Builders owner Jack Donovan has volunteered as the general contractor for the project. Donovan specializes in handicap-accessible houses and buildings.

“We are trying to get a wheelchair lift system donated for the house. If we can’t get it donated, we will do some fundraising to buy it,” Littleton said. “We have a few companies that have already said they will donate material once we start building.”

To volunteer for or learn more about the Josh Carden Project, visit Facebook.com/joshproject or e-mail info@joshcardenproject.org.