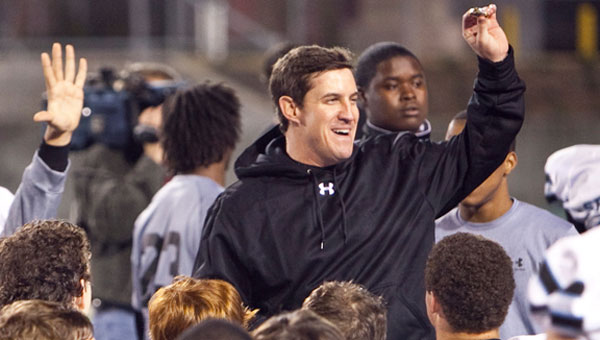 Shores’ coaching contract with Hoover City Schools was terminated by the school board in October following allegations of an “on-the-field” physical altercation with one of his players. Shores was reassigned as the Hoover City Schools’ assistant athletic director.

Shores, who was placed on administrative leave while the Hoover City School board investigated the incident that happened Aug. 24 at a team practice four days before the 2010 season began, was selected from a field of 16 candidates who interviewed for the position. Shores interviewed with Pell City Schools Superintendent Bobby Hathcock, Pell City High School Principal Helene Bettinger and school board attorney Charles Robinson, Jr.

Pell City received approximately 90 applications for the position. Shores replaces Jay Brown, who resigned in Nov. 2010 as the Pell City head football coach and athletic director after leading the Panthers to a 4-6 record.

Pell City, which has failed to reach the postseason the past two seasons, finished sixth in Alabama High School Athletic Association Class 6A, Region 7 with a 1-6 region mark.

Shores compiled a 14-9 record in two years at Spain Park and led the Jaguars to the quarterfinal round of the AHSAA Class 6A playoffs in 2009.

Spain Park named Shores’ assistant head coach Ben Berguson, who coached offensive linemen under Shores, as the interim head coach during the 2010 season. Berguson led the Jaguars to a 6-6 record and a Class 6A playoff appearance.

Spain Park named Chip Lindsey, who served as the Troy University quarterbacks coach during the 2010 season, as its new head coach in Dec. 2010.

FROM STAFF REPORTS The University of Montevallo baseball team’s 2011 season opener has been pushed back one day due to inclement weather in the Pensacola, Fla.... read more