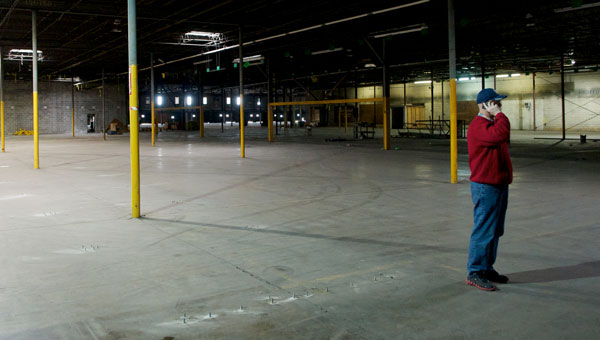 Auctioneer Chip Pearce talks on his cell phone in the empty space of the former Moore-Handley warehouse in Pelham. (Reporter Photo/Jon Goering)

Three years ago, the Moore Handley distribution warehouse off U.S. 31 was filled with hundreds of machines, thousands of boxes and employees rushing to pack and ship tools of all kinds to customers all over the world.

Dozens of cars filled the parking lot, and 18-wheelers came and went at a nearly constant pace.

The interior and exterior of the more than 6-acre building looks much different today. What was once a bustling center of activity and commerce is now little more than a shell of a business killed by the economy.

Dark stains on white tile floors mark the areas formerly occupied by cubicles and call centers, an awning bearing the company’s name still covers a pair of vending machines in the break room and the building’s old mail room is silent.

Save for a few damaged desks and tables, a cavernous warehouse and shipping area formerly packed with pallets of hardware is completely barren.

Chip Pearce, who owns the Alabaster-based Pearce and Associates auction company, recently finished selling off tens of thousands of items left in the building when the company shut its doors in 2009.

“When I left the facility and locked it for the last time, there was just a dramatic visual difference from when we began the auction,” Pearce said. “There are probably 6 or 7 acres under the roof, and it was really eerie to see it all cleaned out.”

It took Pearce one year to auction off all of the items, which included everything from mops and soap to tractor trailers.

“It was definitely the largest auction I’ve ever done as far as quantity of merchandise,” Pearce said. “That first auction, we were auctioning off pallets of merchandise that were taller than an average person.

“That second auction, we sold $500,000 to $700,000 worth of door hinges, just to give you an idea of how much stuff we are talking about. It was nuts,” he added. “We sold hundreds of desks, computers and printers, more than 150 tractor trailers, everything.”

One auction included a 50,000-square-foot mezzanine, a 250,000-gallon water tank and an automated conveyor belt stretching through the building.

“We had buyers from all over the world who bid on that auction,” Pearce said. “A company out of Atlanta won it, and it took them three days to take the conveyor belt apart and get it out of there.”

After Pearce completed the final auction at Moore Handley, little more than a hollow shell remained.

“Right now, there is literally nothing left but the walls holding the roof up,” he said. “Hopefully, there is a buyer out there that will want to purchase the building or purchase the lot and put something else there.”

By BRAD GASKINS and NEAL WAGNER / Staff Writer and City Editor Pelham and Calera are looking to one day... read more