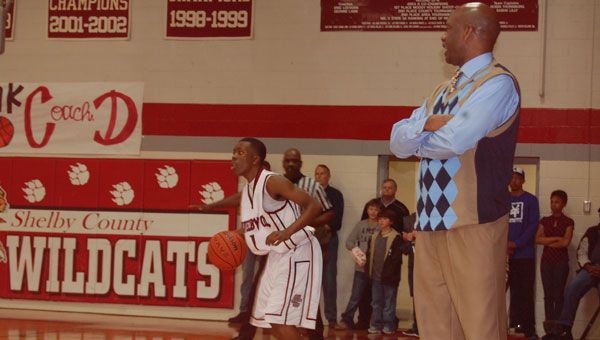 COLUMBIANA — Shelby County High School boys’ basketball coach Charles Dickinson sat in his office Feb. 1 following an 84-80 loss to rival Calera and glanced at the photos of past players and teams that stretch from one end to the other on one of his walls.

Before the game, Dickinson was presented with a framed collage with many of his favorite photos.

Dickinson, who is retiring after a 31-year coaching career at the end of the season, may have just finished coaching his final game inside the gymnasium that bears his name, but he’ll have plenty of reminders from his time on the sideline at Shelby County.

“To be able to take all of my guys home and put them up in my house, that’s priceless,” Dickinson said. “I can’t wait until this thing settles down and I can just look at them.” 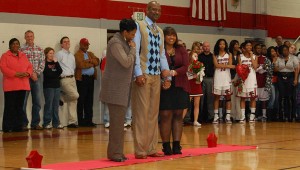 Dickinson will no doubt pause when he looks back at his final team, which made his last home game as the Wildcats’ coach a memorable one.

Shelby County overcame a nine-point halftime deficit and took a nine-point lead in the third quarter before a talented Calera team made a push in the final minutes to come away with a hard-earned victory.

“I think the guys understand their limitations,” Dickinson said. “But they still feel they should win. That’s the legacy here at Shelby County – the idea that you’re supposed to win.”

The Eagles again stretched the lead to nine points on four separate occasions in the second quarter and carried a 46-37 advantage into the locker room at halftime following an offensive rebound and basket by Clark with 23 seconds remaining in the first half.

The Wildcats went on a 12-0 run, capped by a Lollar 3-pointer and a basket and free throw by Madison, midway through the third quarter to take a 55-50 lead with 3:26 remaining in the quarter. Shelby County stretched its lead to nine points at 63-54 following a layup by Madison, which capped a 20-4 run, with 1:55 left in the third quarter.

The Eagles clawed their way back into the game after closing the third quarter with a 10-4 run, which was capped by a Haynes jumper with 17 seconds remaining in the period.

Clark scored a basket to tie the game at 72-72 with 4:32 remaining in the fourth quarter and the Eagles took the lead for good following a layup by Haynes with 3:41 left in the game. The basket started an 8-0 run by Calera, which gave the Eagles an 81-74 lead. Shelby County cut the lead down to three points with 58 seconds remaining following two free throws by Lollar.

However, 3-point attempts by Lollar and Pennington were off the mark in the final minute and Haynes hit 3-of-4 free throws down the stretch to seal the victory for the Eagles.

“Charlie’s teams don’t come out and lay down,” Burdette said. “We didn’t respond to their intensity in the third quarter. We kind of got back in our groove. We withstood their flurry and responded ourselves.”

Burdette, who has shared the sideline with Dickinson in one of the best high school basketball rivalries in the state of Alabama for more than a decade, shared a special moment with his friend after the final buzzer.

“He and I are really good friends,” Burdette said. “Win or lose, you can talk to him the next day. That’s what the coaching profession is all about. We’ll miss him.”

Dickinson was presented with plenty of gifts in addition to the collage before the game, including a plaque, a card and an autographed basketball from his current team.

Dickinson was caught off guard by the ceremony, which included a roast by former SCHS Principal Beverly Hall, thoughtful words from current Principal Gene Rogers and an emotional speech by his daughter Jasmine.

Hall spoke about Dickinson’s activities off the court, which included starting a rock band named “Swinging Medallions” with fellow Shelby County coaches in 1989.

“They wore hubcaps on chains around their necks,” Hall said as the capacity crowd erupted with laughter.

Rogers said Dickinson’s legacy will never be forgotten at the school.

“He holds a special place in the hearts of people here at Shelby County,” Rogers said.

Dickinson’s daughter delivered the most significant speech during the ceremony — one that left few dry eyes in the gymnasium.

Following the loss, the Wildcats will prepare for the upcoming Alabama High School Athletic Association Class 5A, Area 7 tournament. Dickinson understands there are still plenty of photographs to be taken.

“There is still a lot of coaching to be done,” Dickinson said. “We’ve still got some work to do.”