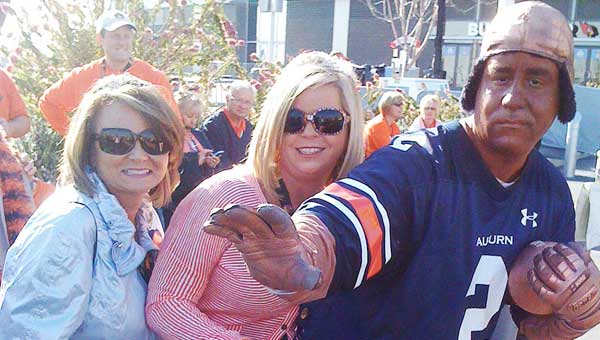 Shelby County has its own chapter of Sweet Potato Queens.

Tina Turner Johnson and Charlon McCombs Couch started the chapter several months ago, but it wasn’t until they went to the BCS National Championship game that the idea really took off.

The trip to the national championship game, they said, renewed their resolve for the new chapter.

“That’s when it really took off,” Couch said of the trip.

Johnson and Couch first started the chapter back in July. They cooked up the idea while vacationing on the beach.

The Shelby County chapter’s name is “The Dazzling Divas.” There are more than 6,000 registered chapters nationwide, according to the official Sweet Potato Queens website.

Johnson and Couch said they’re still working out details of exactly what they want to do with the local chapter. They’re thinking big.

“We’ve got some really big aspirations that are going to take some time,” Couch said.

Johnson and Couch have been friends for a while, going back to their days at Shelby County High School. They both graduated in 1986.

They said they’ve been brought even closer together in recent years by deaths of somebody close to them. Johnson lost her mother, while Couch lost her father.

When they arrived in Arizona, Johnson and Couch put on their plastic crowns and were amazed by the reaction. They estimate they must have taken more than 100 photos with people they didn’t even know.

They made up a sign that read “Cam’s Queens” and took it to an Auburn pep rally before the game. The sign, they said, was a big hit.

The night before the game they were sitting in a Chinese/Mexican restaurant when a lady walked up to them and asked if they’d like to be part of the pre-game ceremony. They said yes.

Johnson and Couch were underneath the large American flag stretched across half the field during the national anthem. It was, they said, an experience they’ll never forget.

They said it was possible because they embraced the Sweet Potato Queens concept and stepped outside their comfort zones. So they returned back to Alabama determined to put more effort into getting their new chapter going.

While the crowns, the smiles, the countless photos and the endless stream of pep may strike some the wrong way at first, they said Sweet Potato Queens are about making other people’s lives better, not bringing attention to themselves.

“Everyone has problems in their life,” Couch said. “If we can take a moment out of someone’s life to bring laughter and happiness to them, that’s what it’s all about.”

Couch, who is the daughter of the late Charles “Papa” McCombs, agreed.

“When we put on our crowns, we are different,” Couch said. “It’s OK. Don’t be afraid to be different. Everybody has a different realm [of people] that they can reach. It’s contagious.”

For more information on the new chapter, e-mail Johnson and Couch at sweetpotatoqueens@msn.com. Also, you can check them out on Facebook at “Sweet Potato Queens of Shelby County – Dazzling Diva Chapter.”