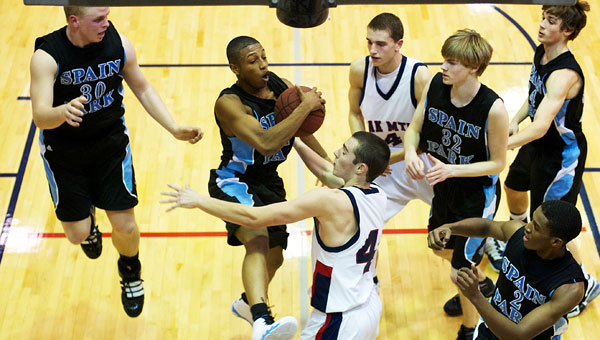 NORTH SHELBY — Spain Park High School boys’ basketball coach Brian Moon has had his share of talented teams during his tenure with the Jaguars, including a squad that made a run to the Alabama High School Athletic Association Class 6A Final Four a few years back.

However, his current team accomplished a feat Feb. 4 that none of his previous teams were able to say they did — a victory on the road at rival Oak Mountain.

The Jaguars raced out to an early 14-2 lead and led throughout in a 47-27 win over the Eagles.

Moon said there was a celebratory mood in the locker room after the game.

“We’ve never beaten them here in probably 10 tries in eight years,” Moon said. “We’ve lost two or three in overtime. It was a great win. The seniors were tickled to death.”

The Jaguars capped a 14-2 run to start the game with a basket and a free throw by Holt with 1:47 remaining in the opening quarter. The Jaguars pushed their lead to 23-8 following a reverse layup by Martin with 4:55 left in the first half.

Oak Mountain responded with a 7-0 run on four free throws by Kral, two free throws by Cosgrove and a free throw by Quinn late in the second quarter to cut the Jaguars’ lead down to 23-15. Close grabbed an offensive rebound and scored a basket with 43 seconds left in the opening half to give Spain Park a 25-15 lead at halftime.

However, the Eagles were unable to cut the lead to single digits in the second half.

Moon praised Lawson, a senior guard, for the Jaguars’ efficiency on offense.

“Steven got us going,” Moon said. “He’s efficient. He doesn’t waste a lot of energy.”