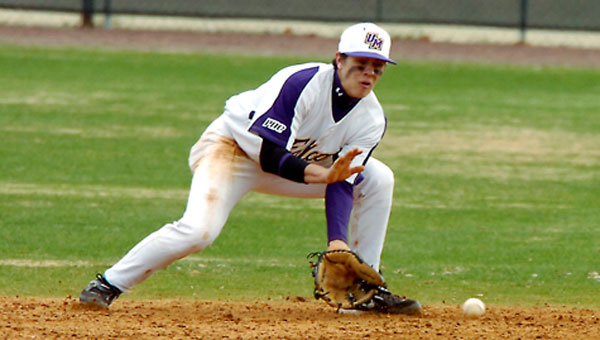 University of Montevallo sophomore Austin Dubberly, a Pelham High School graduate, finished 4-for-7 at the plate with an RBI and two runs scored Feb. 5 in the Falcons' doubleheader sweep of Young Harris College. (Contributed)

Montevallo (2-2) was led by sophomore Austin Dubberly, a Pelham graduate who went 4-for-7 at the plate with an RBI and two runs scored.

Juniors Jeremy Boyte and Blaine Rosenberg, an Oak Mountain graduate, led the team with four RBIs each. Rosenberg had the Falcons’ only homerun in the doubleheader.

Deason finished with three hits, a double and three RBIs. Deason also got it done on the mound, as he came in at the end of both games to pick up a pair of saves. Deason pitched three innings while striking out four batters and not allowing a hit.

Boyte had a pair of doubles and a stolen base to add to his four RBIs. Peterson, freshman Pablo Martell and junior Duston Daugherty, a Hoover graduate, each added a double.

On the mound, freshman Alex Guilford picked up his first career win in the opening game of the doubleheader. Guilford pitched 1 1/3 innings of relief while walking one and allowing just one hit. Senior Joey Noro took home the win in game two, as he started the game and pitched a solid six innings with a strikeout and a walk.

The Falcons got out to a quick start in game one, as they scored six runs over the first three innings. The Mountain Lions cut the lead to 6-3 with three runs in the fifth inning. Montevallo answered with another run in the bottom of the fifth inning to take a 7-3 lead. The game got interesting in the sixth inning, as the Mountain Lions scored seven runs to take a 10-7 lead.

In the bottom of the sixth, Peterson led off with a single up the middle. Dubberly then singled through the left side to move Peterson to second base. Following Dubberly’s single, senior Josh Dabbs walked to load the bases. Rosenberg then drew a walk to score Peterson and cut the lead to 10-8.

After a fielder’s choice, junior Justin Burgess walked to scored Dabbs and cut the Young Harris lead to 10-9. Deason then singled to centerfield to score Rosenberg and tie the game at 10-10. Montevallo was unable to score anymore runs that inning, but scored three more in the seventh inning to take a 13-10 lead.

The Falcons tacked on their final run in the eighth inning. Deason led the way with a 3-for-5 performance and three RBIs. Rosenberg had four RBIs and two hits, while Peterson was 3-for-6 with an RBI.

Young Harris scored the first run in the second game of the doubleheader. The Mountain Lions took advantage of a lead-off double and jumped out to a 1-0 lead after one inning.

Montevallo answered in the second inning, as Dabbs hit a sacrifice fly to centerfield to score Boyte. Young Harris answered with a run in the third inning, and the score remained 2-1 heading into the fifth inning.

Montevallo finally took the lead in the fifth inning, as the Falcons used two hits and a Young Harris error to score four runs and take a 5-2 lead.

Boyte led the team with a 2-for-3 performance at the plate and a pair of RBIs. Dubberly was also 2-for-3 with an RBI.

The Falcons return to action Feb. 6 at 1 p.m. as they wrap up the three-game series with Young Harris College.

FROM STAFF REPORTS The University of Montevallo baseball team’s 2011 home opener has been pushed back one day due to inclement weather in the... read more