Bentley back home for county’s birthday 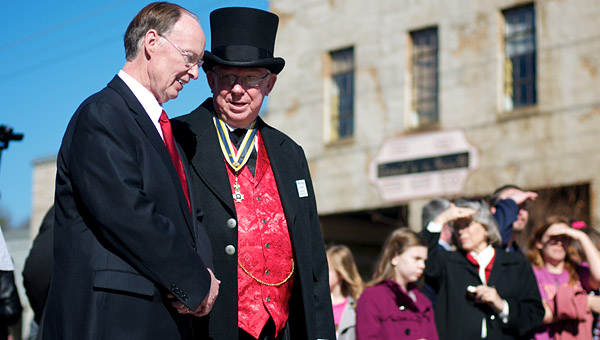 Bobby Joe Seales chats with Gov. Robert Bentley outside of the Columbiana courthouse during the county's birthday celebration on Feb. 6. (Reporter Photo/Jon Goering)

At about 1:30 p.m., the governor and First Lady Dianne Bentley, flanked by a small security team, walked from the church to the courthouse, with American flags displayed from every light pole along the way down Main Street.

Numerous local and state officials attended the ceremony, which drew a standing room only crowd. Those that couldn’t fit upstairs watched on closed circuit TV in a downstairs room.

Chapman said she asked Bobby Joe Seales, president of the historical society, about the significance of Shelby County’s birthday.

The room erupted with laughter at the lighthearted joke aimed at Ellis, the county’s attorney.

“In Shelby County, we’ve all watched the cow pastures turn into business centers. We’ve watched homes and schools grow by leaps and bounds,” Chapman said. “Being one of the fastest growing counties in the state presents its challenges, which when overcome presents the right of passage to being the greatest county in the state. No doubt, Shelby County has earned that right.”

Chapman said there is a reason Shelby County sits in the geographic center of the state.

Bentley was then presented with two proclamations and a series of gifts.

Gifts were presented from the Greater Shelby, South Shelby and Montevallo chambers of commerce.

David Nolen presented Bentley with a Pioneer Certificate from the historical society.

Bentley then made his remarks, some lighthearted and some serious.

“I am going to make the people of Shelby County proud,” he added.

Bentley said it’s important for elected officials to remember whom they serve.

“We should have a servant’s attitude,” he said. “Those of us who are elected need to realize that every office belongs to the people, it doesn’t belong to us. We need to always remember that we were placed here because people had confidence in us and feel like that we can do a good job. We need to prove that we can.”

He said times are tough right now in the state.

Bentley has been governor for three weeks but said “it seems like honestly it’s been four years.”

Bentley said he’s made a commitment to visit with the families of every fallen solider from Alabama.

“I’ve already done that twice,” Bentley said to loud applause. “As a veteran myself, and many of you here today are veterans, you understand what I’m talking about. We would not stand here today without the soldiers. We need to honor those soldiers. I’m going to honor those from Alabama.”

Bentley then acknowledged Dianne Bentley, his wife of 45 years.

“After some of the slipups of the tongue that I do sometimes, I told her the other day that I guess my chances of being president are pretty slim,” Bentley said. “She said ‘good.’”

Bentley said he speaks openly and honestly and always answers the questions.

“Sometimes my mouth gets my in trouble,” Bentley said. “But you know what else, it got me elected.”