Hornets down Aggies in tourney opener 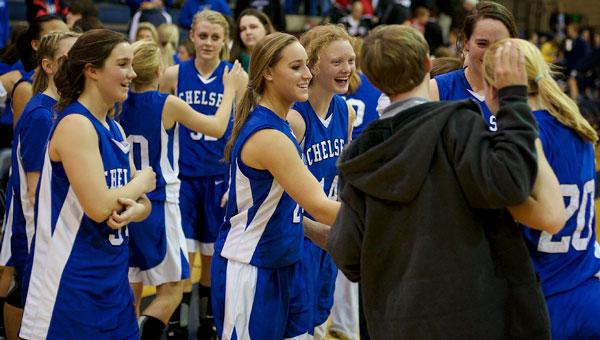 NORTH SHELBY — An injury robbed Chelsea High School senior Lauren Swee of the majority of her final season on the basketball court.

Swee is making the most of the limited time remaining in her career.

Swee swished a game-clinching 3-pointer with 14.7 seconds remaining to lift the Hornets to a 41-39 win over Sylacauga in the opening game of the Alabama High School Athletic Association Class 5A, Area 7 tournament Feb. 7 at Briarwood Christian School.

Chelsea coach Wayne Trucks wasn’t concerned about giving the ball to Swee, who returned to action for the first time last week since offseason surgery on her foot in September 2010, for the final shot.

“(Swee) has never lacked for confidence,” Trucks said. “She’s a senior, and she’s our captain. She’s our heart and soul. It’s nice to see her finish her career on the floor.”

Swee finished with seven points in the victory.

Sydney Hobson and Ashleigh Niven chipped in two points each in the victory. Destiny Winters and Tammy Trout played but did not score.

The Hornets jumped out to an early 11-5 lead following an 8-1 run, which was capped with a steal and a layup by Swee with 3:26 remaining in the opening quarter.

Sylacauga responded with a 9-2 run to take a 14-13 advantage early in the second quarter. Holliday drained a 3-pointer and Mock swished a jumper in the final minute of the second quarter to cap a 5-0 run by Chelsea and give the Hornets a 23-20 lead heading into the locker room at halftime.

The Hornets capped a 9-2 run early in the third quarter with a jumper by Swee with 4:58 remaining in the period to take a 27-22 lead. Sylacauga responded with a 7-0 run to take a two-point lead before Hobson grabbed an offensive rebound and scored a basket with 51 seconds left in the third quarter to tie the game at 29-29 heading into the final period.

Sylacauga guard Shakayla Thomas responded with a basket and a free throw to give the Aggies a 38-36 advantage with 1:26 left in the contest. Thomas led Sylacauga with a game-high 16 points.

Mock was fouled on an offensive rebound attempt and calmly stepped to the free-throw line to drain both of her attempts, which tied the game at 38-38 with 46 seconds left. Thomas hit 1-of-2 free throws with 26.5 seconds remaining to give the Aggies a 39-38 lead.

Following a timeout, Chelsea inbounded the ball directly to Swee, who was open at the top of the key and didn’t waste any time before firing the game-winning shot. The Aggies had a chance to tie the game with 3.6 seconds remaining, but Thomas missed both of her free-throw attempts and Mock secured the rebound to run out the clock.

Trucks said Chelsea, which avenged two regular season losses to Sylacauga, will enter its third meeting with the Lions without any pressure.

“Our motto is ‘Today,'” Trucks said. “This group really believes in each other and what we’re trying to do.”