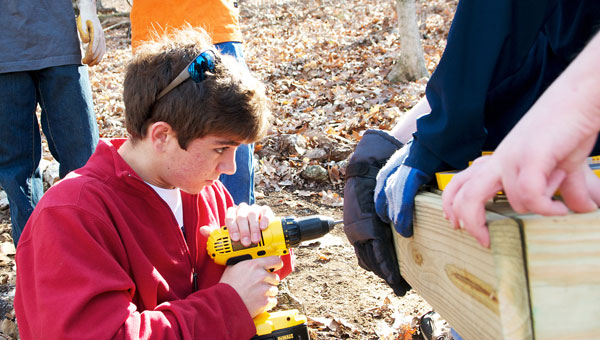 Anders Allen works on repairing a bench along the trails behind the North Shelby Library on Jan. 29. (Reporter Photo/Jon Goering)

NORTH SHELBY – Those visiting the North Shelby Library can continue learning while also catching some fresh air, thanks to a local Boy Scout.

Anders Allen, a junior at Oak Mountain High School, is refurbishing a nature trail, the Alabama Forests Forever Trail, behind the library for his Eagle Scout project.

He, along with members of his Boy Scout troop, Troop 533, spent four Saturdays in January doing lots of manual labor. They placed rocks alongside the path to mark the trail, as well as raking the trail. They also placed two benches along the path, which is 810 feet long, Allen said.

“(The trail) was already there, but you could barely see it,” he said.

Allen said he came up with the project with the help of his scoutmaster and Fred Kapp, of the Alabama Green Industry Training Center.

“We thought it’d be a great project to do,” Allen said.

The project isn’t yet complete, however. Signs are being made to go along the trail that will share information about nature, such as how hikers can read moss growing on the side of trees to find out which way is north.

Allen said installing the signs will take about another 24 hours of work time, then his project will be complete. He’s hoping to have everything completed by the end of February.

He said heading up such a large project taught him lots of lessons.

“I learned a lot of leadership qualities and how to be a leader,” Allen said. “It’s made me more responsible. It taught me how to plan out projects and lead other people. It’ll help me in my life a lot.”

Allen has been a Scout for about nine years. He left Boy Scouts at age 13, then came back to Scouting at age 15. He currently teaches environmental science in the summers at Camp Sequoyah in Delta, Ala.