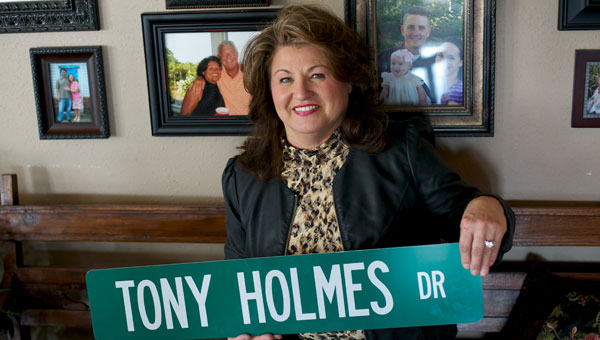 Shelby County’s two largest cities are remembering a man who many civic and business leaders credit with shaping the county into what it is today.

Anthony “Tony” Holmes, who died in September 2010 at the age of 58 after a lengthy battle with cancer, gave years of his life in service to Alabaster, Pelham and all of Shelby County, said those who knew him.

“He was a good community person. He was always very friendly and was willing to work with everyone,” said Pelham Mayor Don Murphy. “He was the kind of guy we all need to be, to be honest with you.

“He was just a good fellow we needed around, but it looks like the good Lord needed one too,” Murphy added. “He did a lot of stuff he didn’t get paid for, but he did it anyhow because it made the county a better place.”

Holmes served as the president and chief executive officer of Regions Bank of Shelby County for many years, and was involved in many civic and business organizations such as the Alabaster Industrial Development Board.

Holmes’ wife, Sharon, described him as a man who was devoted to his family, his faith and service to others.

“Tony inspired others. For all that he came in contact with, either as a customer, co-worker, new acquaintance, friend or family, he left them encouraged and inspired to push on or with better alternatives to approach difficult situations,” Sharon Holmes said. “All that new him knew he was always going to do the right thing.

“Tony’s character, work ethics, honesty, sincerity, integrity and leadership were immeasurable traits,” she added. “I would say modesty was his strength. He was not aware of the positive impact he had on those he knew and met.”

Sharon Holmes said she cherishes fond memories of spending time with her husband in many different locales.

“He loved taking the pontoon boat out on the lake, beach trips, golf, tennis and get-togethers with family and friends,” she said. “But one of my fondest memories was the loving look in his eyes every time I sang his favorite Patsy Kline song, ‘Crazy.’ I was proud to be his wife.”

During its Feb. 7 meeting, the Pelham City Council voted unanimously to rename the former First Alabama Bank Drive off U.S. 31 to Tony Holmes Drive, which will forever serve as a testament to Holmes’ service, Murphy said.

Holmes lived in Alabaster for many years, and was a founding member of the city’s Westwood Baptist Church.

Darryl Collins, Westwood’s minister of music, said he and Holmes were close friends for more than 40 years, and described him as a “man of integrity” who told the truth no matter the circumstances.

“If he didn’t think you could afford a loan, or if you weren’t walking like you should in your faith, he would tell you like it was,” Collins added.

“He just couldn’t have been any nicer. You could always just tell he was a leader,” said Alabaster Ward 7 Councilman Tommy Ryals, who lived two doors down from Holmes for more than 10 years.

“He enjoyed working to help people,” Ryals added. “He was heavily involved in a lot of the Shelby County activities. He was a very influential person.”

“He was a very nice man. He did an excellent job with everything he did,” Frings said. “He was always very professional, and he was always a gentleman.”

“He came in here (to Pelham) as a young man and started at the bottom of the bank and worked his way up to the top,” Murphy said. “Over the years, he earned the respect of the community leaders. He was very involved in our community.

“He was a great banker. There aren’t many of those left,” Murphy added.

“He truly understood the community. He really got out there and built relationships that benefited the whole county, and our (Pelham) region specifically,” Trammell said. “He has definitely left a legacy. He was a great man.”

By BRAD GASKINS / Staff Writer COLUMBIANA – Whether you’re a cowboy, cowgirl or just want to play one for... read more