Columbiana resident Armistead could be state GOP’s next chairman

The State Republican Executive Committee will choose between Armistead and state Rep. Jay Love of Montgomery when it meets Feb. 19 in Montgomery. Whoever is chosen will lead the party into uncharted political waters.

For the first time in 136 years, the GOP has majorities in both the House and Senate. Former state Republican chairman Rep. Mike Hubbard of Auburn is now the speaker of the House. 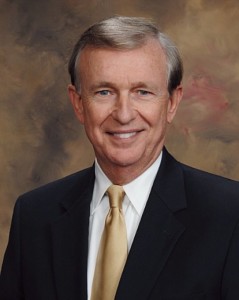 In the Nov. 2010 election, Republicans won every race for statewide office. Republicans are now the state’s dominant party.

“The biggest threat is Democrats coming into our party and taking it over,” Armistead said Feb. 9.

“If they are conservative, and they have a voting history of being conservative but just have not switched parties, then I would welcome them into the Republican party,” Armistead added. “If they’re looking for a place to run to get elected but do not share our philosophies, there’s no welcome sign outside the house.”

Any Democrat declaring to be Republican without sharing Republican philosophies would face opposition in the primary, Armistead said, noting that it would then be up to each community to protect the party’s values.

Looking ahead to 2012, two state offices currently held by Democrats are up for election. Armistead said the party would work to unseat state Supreme Court Justice Sue Bell Cobb and Lucy Baxley, president of the public service commission.

However, Armistead said, more emphasis would be placed on races at local levels.

“The main focus would be targeting the courthouses,” Armistead said.

In 2012, circuit clerk and probate judge are the only two offices up for election in every county.

Of the state’s 68 probate judges, 21 are Republican, Armistead said.

Of the state’s 67 circuit clerks, Armistead said 17 are Republican.

“That leaves a sizeable number for us to go after in counties that have voted Republican,” Armistead said. “We just haven’t served up candidates most of the time for these local offices. The field is ripe for harvest, and I will zero in on them like a laser beam.”

If elected chairman, Armistead said he would place a greater emphasis on bringing Republican presidential candidates to speak in Alabama.

Armistead said he would hold state Republicans accountable for their platforms to ensure they do what they said they would do.

Armistead, 66, has lived in Columbiana with wife Emily for 18 years. He has two kids and five grandkids. He currently works as a product consultant for Fidelity Information Services.

His political career began in 1963 as a college student at Samford University, when he became interested in Barry Goldwater. After reading up on Goldwater, Armistead said he called Alabama Republican headquarters in Birmingham for guidance.

Based on those conversations, Samford’s College Republican Club was founded with Armistead as president.

Armistead worked at state headquarters during Goldwater’s 1964 presidential run, and in 1965 became the state party’s first field representative. He spent that summer traveling across south Alabama.

Armistead has served on the Republican executive committee since 1993 and as vice president of Districts 3, 6, and 7 since 1996.

“I’m confident that next year is going to be a banner year for Republicans in Alabama at every level,” he said.