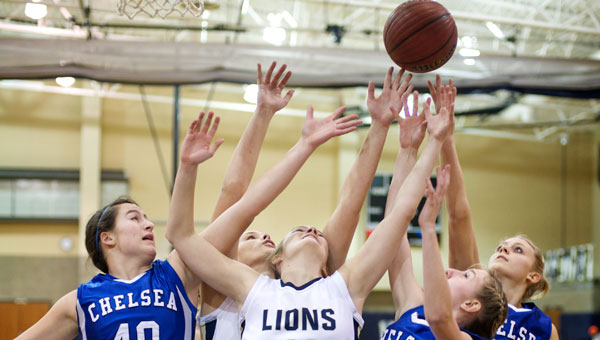 Briarwood Christian School senior forward Anna Handlin battles with a group of Chelsea defenders for possession of the basketball during the Lions' 43-41 win over the visiting Hornets in the Alabama High School Athletic Association Class 5A, Area 7 tournament semifinals Feb. 10. (Reporter Photo/Jon Goering)

NORTH SHELBY — The Chelsea High School girls’ basketball team experienced the watermark of its season three nights ago inside the gymnasium at Briarwood Christian School following a last-minute victory over Sylacauga in the opening round of the Alabama High School Athletic Association Class 5A, Area 7 tournament.

The Hornets returned to the scene Feb. 10 hoping to build on the momentum built in their first postseason game.

Chelsea rallied from a double-digit second-half deficit to turn the Class 5A, Area 7 semifinal contest against the rival Lions into a one-possession game before a questionable whistle in the final seconds sent the Hornets back home for the offseason with a 43-41 loss.

Chelsea forward Perri Lambert hit the first of two free-throw attempts to cut the Lions’ lead to 43-41 with 1.7 seconds remaining. Lambert intentionally misfired on the second attempt and it appeared the ball grazed the rim, but a game official ruled the ball fell short of the iron.

Briarwood Christian inbounded the ball and ran out the clock to seal the victory.

“(Lambert) did it exactly the way we told her to,” said Chelsea coach Wayne Trucks. “We had Amanda (Mock) in position for the rebound.” 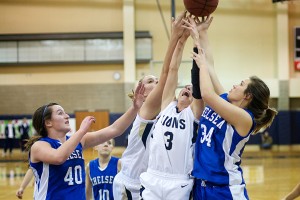 Botes scored seven of her 11 points in the opening quarter to help the Lions jump out to a 16-10 lead after the first quarter.

Briarwood Christian led by as many as 11 points in the second quarter at 22-11 following Scotts’ layup midway through the quarter before settling for a 24-16 lead at halftime. 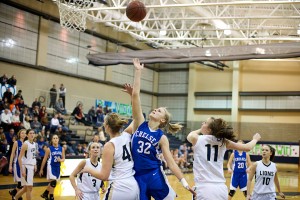 The Lions held a sizable lead throughout the third quarter before Chelsea made a rally in the final period.

Swee grabbed an offensive rebound and scored a basket to cap an 8-1 run by the Hornets and cut the lead down to three points at 38-35 with 1:50 remaining in the contest. Swee drained a 3-pointer with 1:13 left in the fourth quarter to cut the Lions’ lead to 40-38.

Chelsea had a chance to either take the lead or tie the game twice in the final minute, but a missed 3-pointer and a reverse layup attempt that came up short by Lambert kept the Hornets from completing the comeback.

Lambert was fouled on a drive to the basket with 1.7 seconds remaining and hit the first free throw before setting up the potential offensive rebound and basket to tie the game.

“It was a tough way to finish the season,” Trucks said. “I was proud of the girls and proud of their effort. We had a chance to win.”

Briarwood Christian coach Jim Brown knew the Lions would have their hands full with a Chelsea squad entering the postseason at full health.

“It was what I expected,” Brown said. “If there was anybody that I didn’t want to play, it was this team.”

The Lions advanced to the Class 5A, Area 7 tournament championship game, where they will meet Talladega in the title game Feb. 12 at 6 p.m.

Briarwood Christian won both meetings against Talladega during the regular season, but Brown said the second meeting was much closer than the first.

“We’ve got our work cut out for us,” Brown said.