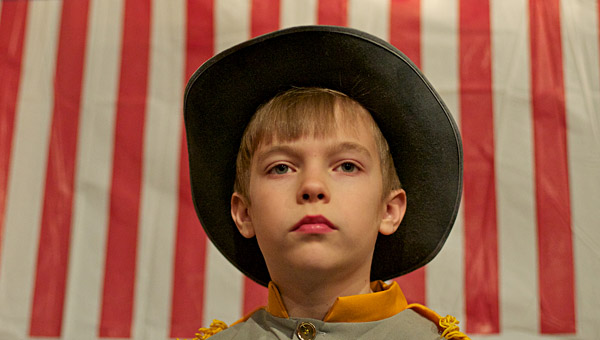 Shawn Mattie as Robert E. Lee stands frozen in his pose during the Living Wax Museum on Feb. 11 at Cornerstone. (Reporter Photo/Jon Goering)

The Civil War nurse and founder of the American Red Cross spoke to parents and friends of students at the school.

“I may be compelled to face danger, but never fear it, and while our soldiers can stand and fight, I can stand and feed and nurse them,” said Barton, a wounded soldier lying at her feet.

Barton died in 1912, of course, but was brought back to life by Sara Grace Johnson, one of 11 third-grade students who presented a “Living Wax Museum” in the CCS Youth Room. 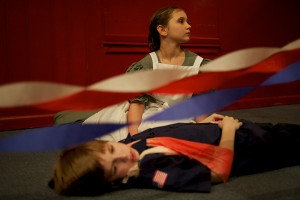 “I think it’s a great way to learn history,” said Tammy Johnson, Sara’s mom. “It’s been a lot of fun for her. She won’t ever forget it.”

That was the idea, third-grade teacher Robin Davis said.

“I was looking for ways to bring the material to life and make it a deeper learning experience for them,” Davis said. “They’ll remember this when they’re 60.”

The students, dressed as American history characters, “came alive” when a parent or friend placed change in a cup in front of their display. They gave a one-minute biographical presentation complete with props and famous quotes. 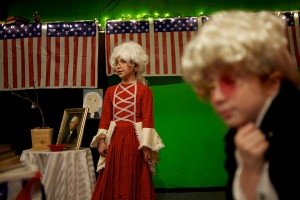 The event was three months in the making.

The first month, students read about the person in the school’s history book and wrote a paragraph on what they learned.

The second month, students chose books from the library or bookstore and prepared book reports.

The third month, students wrote speeches as though they were the historical figures, which included creating costumes and visual displays.

“Through each step they would present what they were learning to the class,” Davis said.

Students selected which character they wanted to learn about from a list of about 30 in the school’s American history curriculum, which created a slight problem: most of the historical figures were male.

All but three of Davis’ students are girls. Female students had the option of portraying the wife of a historical figure.

Davis said she hopes the project gave students a better understanding of history, her least favorite subject when she was an elementary school student.

“In college, I discovered how interesting history is,” Davis said. “I wished that somebody had gotten me interested in it at a young age. That’s what I’m trying to do with this class.”